When our first ever remote retreat came to a close, I was surprised to feel the same curious combination of exhaustion, inspiration, and energy I typically feel at the end of an in-person retreat. It seemed that with only 10 days to plan, and in the midst of a global pandemic, we had pulled it off.

While we love being a fully distributed team — with 106 employees in 75+ cities around the world — in-person time is precious to us at Help Scout. Typically, we see each other twice a year and get a chance to reconnect, build trust, and gain momentum.

This is why when the COVID-19 pandemic emerged, it was hard to let go of the months of work that had gone into planning our in-person retreat. Despite that disappointment, it was easy to decide we still needed needed a retreat week — we just needed to make it virtual.

Coming out the other side, many people on our team felt a renewed sense of connection and good vibes about the week. I can confidently say that through asynchronous activities, goofy videos, and virtual happy hours, we managed to capture some of that in-person retreat magic.

Because many teams are considering transforming their in-person events into virtual ones, we wanted to share what worked well for us. We hope it’s helpful! 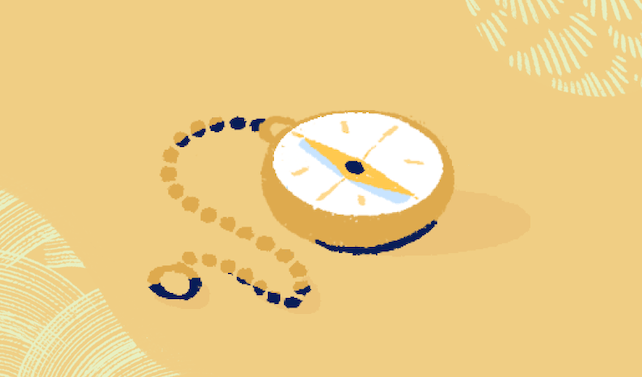 Invite people into the planning process

The best resources are always your people! At Help Scout, I’m lucky to work with so many helpful, creative people — within 24 hours of making the call, a teammate had already created a dedicated Slack channel to brainstorm activity ideas. Asking for help will not only bring you unique ideas but also different perspectives on how to structure your time.

This is also a great opportunity to ask your managers to nominate people whose skill sets or interests match what needs doing. The more engaged your activity organizers are, the more likely those ideas will flourish in the execution.

Lean into the weirdness — and video

Giving people permission to feel a little weird is key. If you’re not used to hosting virtual happy hours or gathering a hundred people together on Zoom for a town hall, it might feel a little different, but lean into it!

Messaging to your team that everyone is in the same boat helps create that special bond that emerges when a group goes through something new together for the first time. I also recommend amping up the weirdness even more just to make your point and get a few laughs. At the very least, you’ll get people curious, and if you’re lucky, they will feel both entertained and engaged.

Our CEO, Nick Francis, kicked the week off with this video, including a cameo in a reindeer suit:

Using video is critical for a remote retreat, and nobody has to be an expert videographer or editor to make magic happen. Video also adds a new medium to spice up Slack and Zoom and will help you carry out your in-person routines and rituals in new, creative ways.

For example, at each retreat, every manager gives out an award to a member of their team who went above and beyond, exemplifying our company values. Instead of having a real-time awards ceremony like we would have at an in-person retreat, each manager recorded a fun, silly video to present the award and shared it in our Slack retreat channel.

To amp up the weirdness, we asked managers to choose a random household object as a representation of the award to present in their videos. We ended up with a dancing T-Rex, ceremonious toilet paper, and even a talking unicorn — which would’ve never happened had we been together in person.

Video can also help explain and illustrate how an activity works, not to mention get people excited for the activity. Here’s how we explained a hat-making activity that had both an asynchronous and real-time component.

Set expectations and get creative with your kick-off

We reminded folks that the goal of a retreat week is to build relationships with your teammates and reenergize. Sharing self-care notes is also important and was even more pertinent as we were all adjusting to the news and new rhythms of a global pandemic.

We also had an activity to look forward to first thing Monday morning: Two creative teammates worked together to host an asynchronous virtual scavenger hunt, and they made an amazing video to get everyone hyped. This helped set the tone for the week and got us kicked off with some great energy.

Check out the video:

Over-communicate the schedule and send lots of reminders

Share the schedule with your team in advance, and then remind everyone regularly. We had a spreadsheet schedule, a Google Calendar schedule, and daily Slack reminders, and it still didn’t feel like enough! Even little things like @mentioning everyone in your Slack retreat channel a few minutes before an event starts is helpful and so nobody misses out.

One thing we would definitely do next time is share the schedule at least a week in advance to give folks time to organize smaller virtual meet-ups on their own. 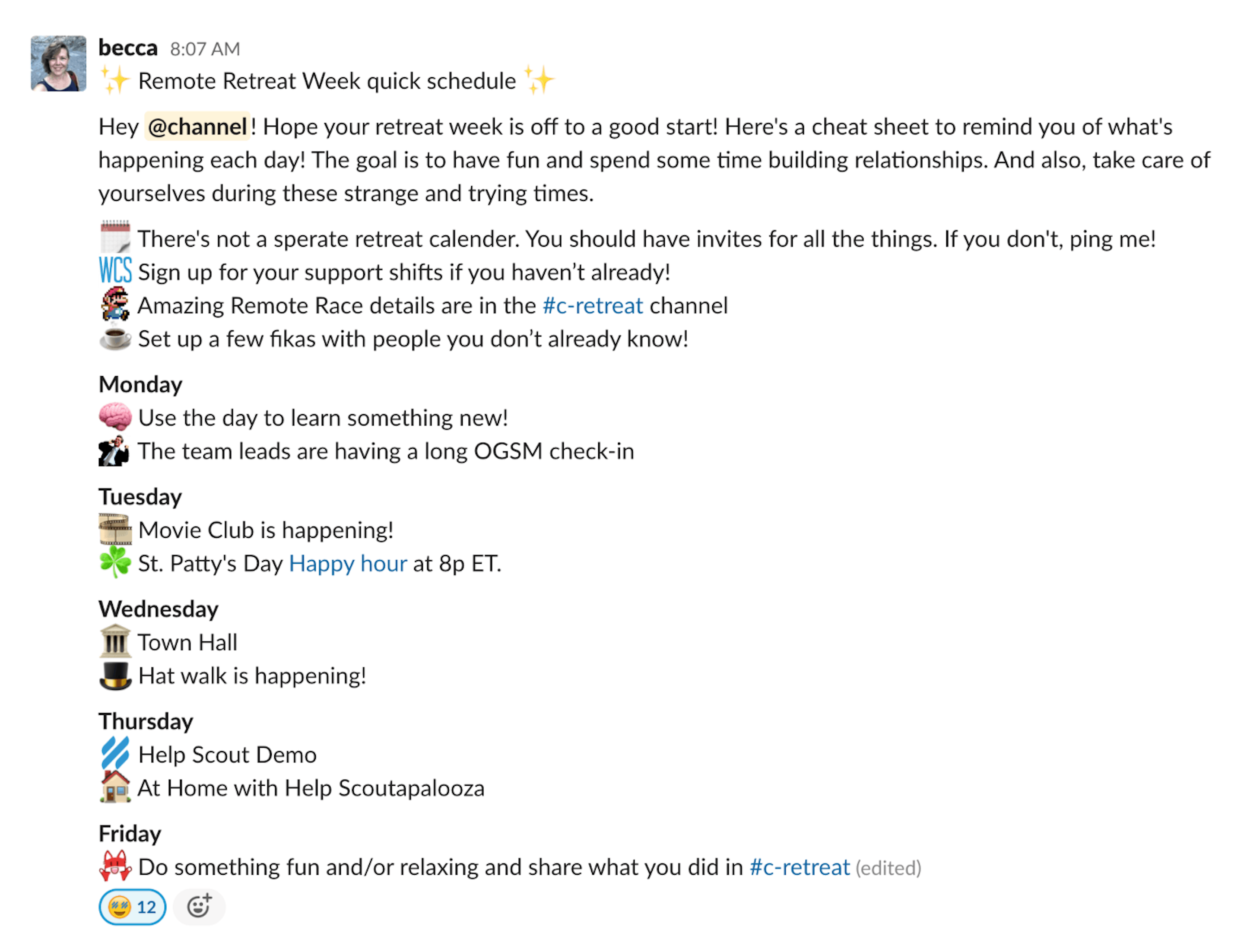 Amp up your company rituals

If you are a remote team and have relationship building activities already baked into your culture, we found that remote retreats are a great time to dial that up. Without a regular work week, there’s more space for these activities, and the barrier to entry is lower because it’s not something new.

We have a tradition of Fikas (virtual coffee breaks) at Help Scout, where teammates join our Slack Fika channel and are paired up by Donut every four weeks to have a chat. But for our remote retreat week, we asked everyone to plan 1-2 per day!

Since a major goal was to build relationships, we wanted to give plenty of time for people to do just that. We helped people meet this guideline by adding a couple extra Donut pairings to the week.

We also have a tradition where we make home tour videos called At Home with Help Scout. The team loves viewing these tours but often don’t have enough time to make their own, so we incorporated filming a home tour as a specific retreat activity!

Then, our Director of Talent Acquisition, Leah Knobler, hosted a real-time viewing, complete with an Academy Awards theme, awards, and black tie attire. Remember, lean into the silly!

Tips from 100+ remote workers to help you stay productive when working from home. 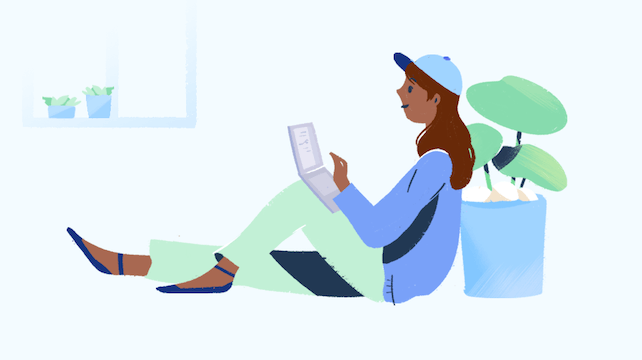 One of the things I love about retreat week are the spontaneous, off-the-cuff moments that happen organically when together in person. I was worried a remote retreat wouldn’t allow for this, BUT I WAS WRONG! I was so thrilled when our scheduled viewing of At Home with Help Scout morphed into some live impromptu home tours after the award ceremony was over.

People also were not afraid to fire up a virtual happy hour. We used our Slack retreat channel to post links, and anyone who was around could pop in to say hi and have a chat. I recommend leading by example and encouraging other folks on the team to self-organize these kind of things.

Mix up real-time and asynchronous activities

Since we have teammates all over the world, we had to be extra mindful about managing timezones and balancing when and how activities happened. And whenever possible, we recorded things over Zoom so people could watch at times that were convenient to them.

Town halls can be comforting, inspiring, and energizing. We had our Town Hall early in the week to set the tone, address the pandemic, and reassure our team that leadership has a plan. If you are converting your in-person retreat to a virtual retreat, be sure to adapt your content accordingly. We also encouraged people to ask questions and utilize Zoom chat, which helped keep people engaged and feel connected. 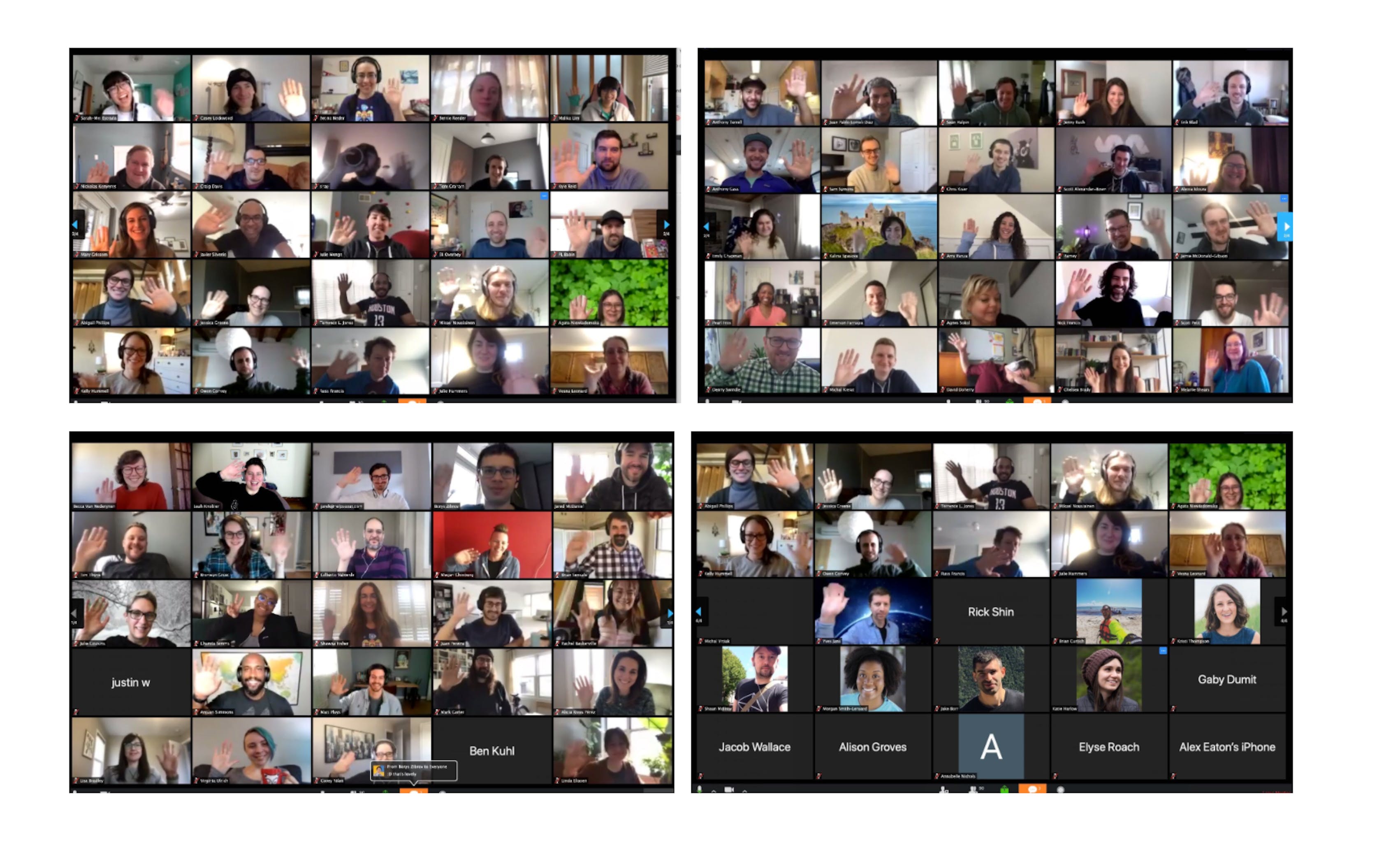 Play time was encouraged throughout the week, but we made Friday an official “play day” to set aside time to recharge. People posted pictures of what they did with that time in the retreat channel, which was another fun way to learn more about each other and feel close to one another.

Werewolf is a card game that Engineering Manager, Anjuan Simmons, organized for his team to play over Zoom. It was a favorite for those who participated. Anjuan even wrote instructions on how to do it virtually! It turned out to be a big hit.

The Amazing Remote Race – As mentioned above, Julie Cousins, one of our Engineering Managers, and Sarah-Mei Estrada, one of our Customer Support Managers, organized and led a remote scavenger hunt. They put together a fun “trailer” video and documentation so people knew how it would work, and then created a list of things to find and photograph in a dedicated Slack channel. 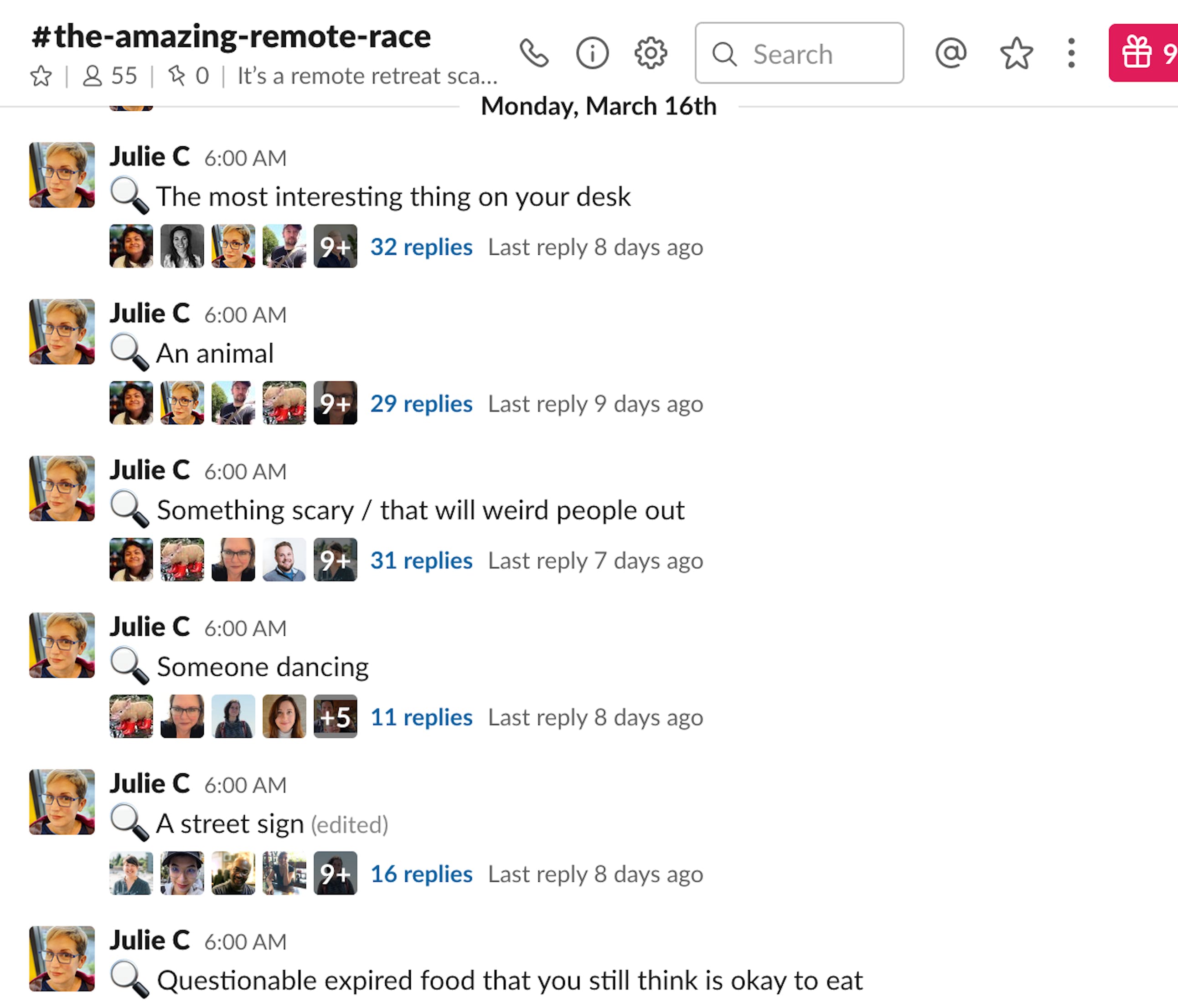 Part of the magic of this asynchronous competition was the ongoing updates from Julie and Sarah-Mei throughout the week, as well as the “Scout’s Choice” award where people voted with emojis on their favorite entries.

Movie time – What better activity is there than watching a movie at the same time with teammates from all over the world? We designated time on the calendar for it and created dedicated Slack channels to chat together while we watched. People also shared photos of their movie setups!

Learn something day was a dedicated day to explore something (alone or together) that you’ve been thinking about. People posted about what they were up to in the retreat Slack channel. 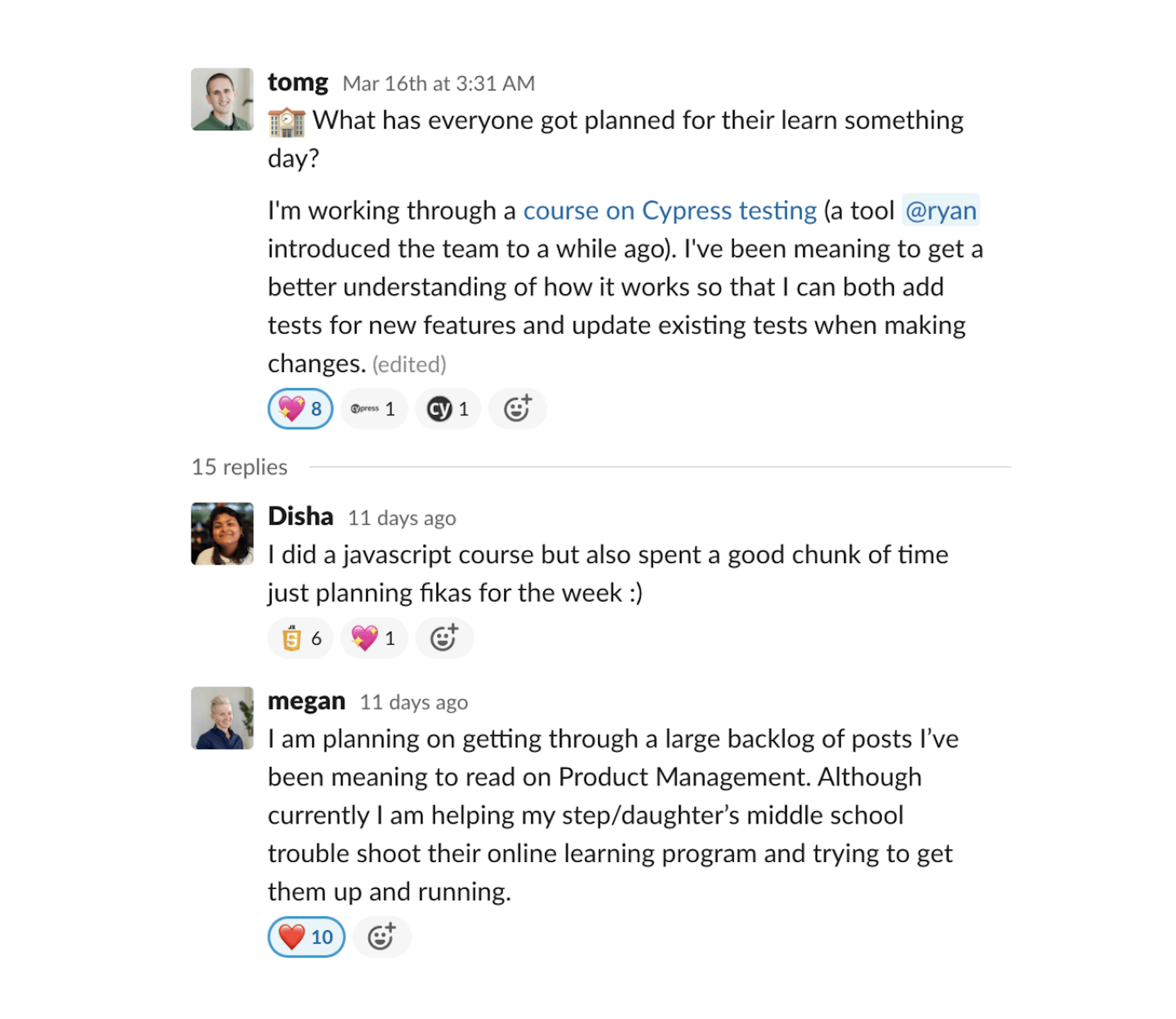 The GIF Game is a great team-building idea for smaller groups. Using a Google Form, ask teammates to anonymously submit four GIFs that represent who they are, and then when you get together over Zoom, it’s fun to guess which GIFs belong to each member on the team.

Hat making – We love constraints at Help Scout, and this was a fun one. We invited everyone to make hats with items found only in their house. This encouraged everyone to be adventurous with paper, sticky notes, fabric, feathers, plants, dry pasta, etc. and make a hat they were pumped to “show and tell” in a Wednesday afternoon Hat Walk on Zoom. 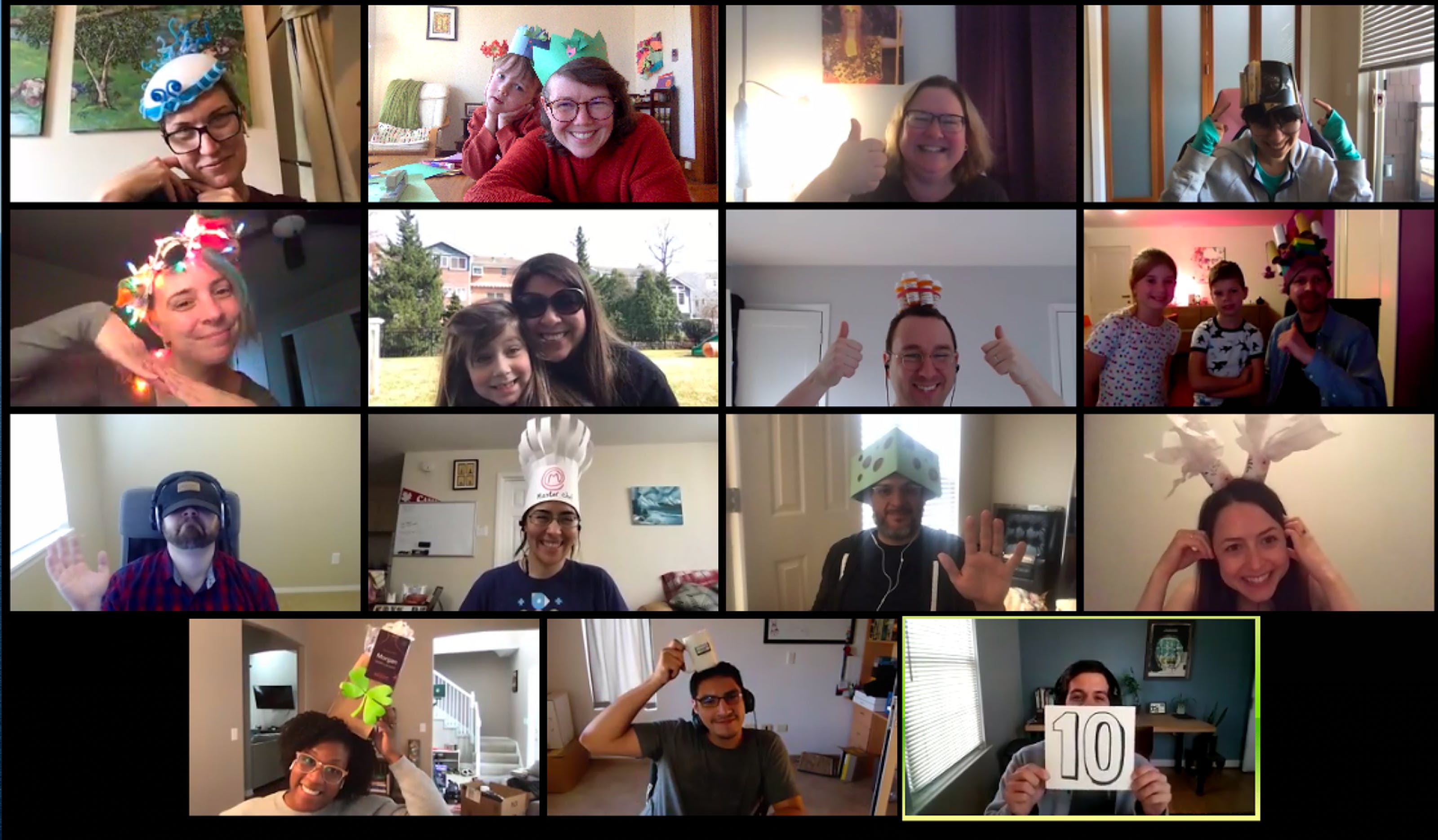 Unsurprisingly, the biggest challenge in planning a virtual retreat was time zones. Hands down, if we plan another remote retreat, we’d put a lot more thought into this. While the asynchronous activities worked well, our farthest-flung folks missed out on a lot of the real-time activities.

Next time, we’ll brainstorm with our teammates in Australia and get their ideas on how to be more time zone inclusive. One idea that came out of the feedback was to have more activities grouped around time zone instead of teams. That way, more people can participate, as well as have the opportunity to connect across teams.

After every retreat, we love to share a video recap with footage of us all together, and we didn’t want this retreat to be an exception. Leah Knobler pulled together different kinds of footage from the week to share with the team.

As we all continue on in these uncharted times, it’s so important to find ways to connect and feel human even though we can’t be physically together. Our first ever “remote retreat” gave us all the huge boost of morale and closeness we were hoping for, and we wish the same for every company. Becca is head of People Ops at Help Scout and is obsessed with crafting a delightful employee experience. Connect with her on Twitter and LinkedIn.