Giving Your Customers a Peek Behind the Curtain

How does a company compel men to spend $700 on a pair of boots?

When your brand name isn’t something like Ermenegildo Zegna, it’s quite a conundrum. For Viberg Boot, crafters of work and fashion footwear for men, it wasn’t an issue of quality—they really were using the best materials out there, in addition to crafting shoes by hand.

The problem was that talk is cheap. Adding “handmade” next to that shocking sticker price wasn’t going to convince people to jump over such a hefty psychological hurdle. The proof is in the pudding, and Viberg had to whip up something to let customers know that their shoes were worth the money.

As John D. Rockefeller so famously put it:

Viberg’s solution was to give people a genuine look into how their product was made, with the goal of selling them on the story, the process, and the values that the company held dear. In short, they gave folks an inside look at why what they were about to buy was the best on the market.

This is the essence of “behind the scenes” marketing, and right now we’ll look at why this peek behind the curtains can be so enticing to prospective customers.

Help Scout is an all-in-one customer service platform that helps you balance everything your customers need to be happy.

Why “Behind the Scenes” Marketing Works

The product should be its own best salesman. Not the product alone, but the product plus a mental impression, and atmosphere, which you place around it.” — Claude Hopkins

For Viberg, superficial marketing such as a random celebrity endorsement wasn’t going to win over the highly discerning customer base they were hoping to attract with their footwear.

A more endearing and honest approach was needed. Their subsequent strategy—to release footage of their workers amidst their craft—was highly effective and well received. If you watch the example video below, you might find yourself pining for a pair of Vibergs.

This is a process that the folks at Conversion Rate Experts have called the 100 Year Old Persuasion Strategy, named so because one of the finest (and first) documented examples of its usage comes from legendary advertiser Claude Hopkins.

Tasked with selling Schlitz beer in the early 1900s, Hopkins was faced with a very competitive market. The solution he came up with to move Schlitz into the limelight was deceptively simple: he used precious advertising space to describe exactly how the beer was made.

He noted in his market research that one of the most important attributes at the time for consumers was that the beer was perceived as “pure.” Many companies made the claim and many made pure beer, but Hopkins was the first to create a campaign around this facet:

“He toured Schlitz’s operations and noted down all the interesting aspects of the company’s process. In particular, he highlighted those that supported Schlitz’s main claim: that its beer was pure. The campaign was a huge success. Within a few months, Schlitz went from fifth place to being tied for first in the market.”

If you have any fondness for old advertising campaigns, you’ll enjoy this vintage photograph of one of Hopkins’ famous Schlitz ads. 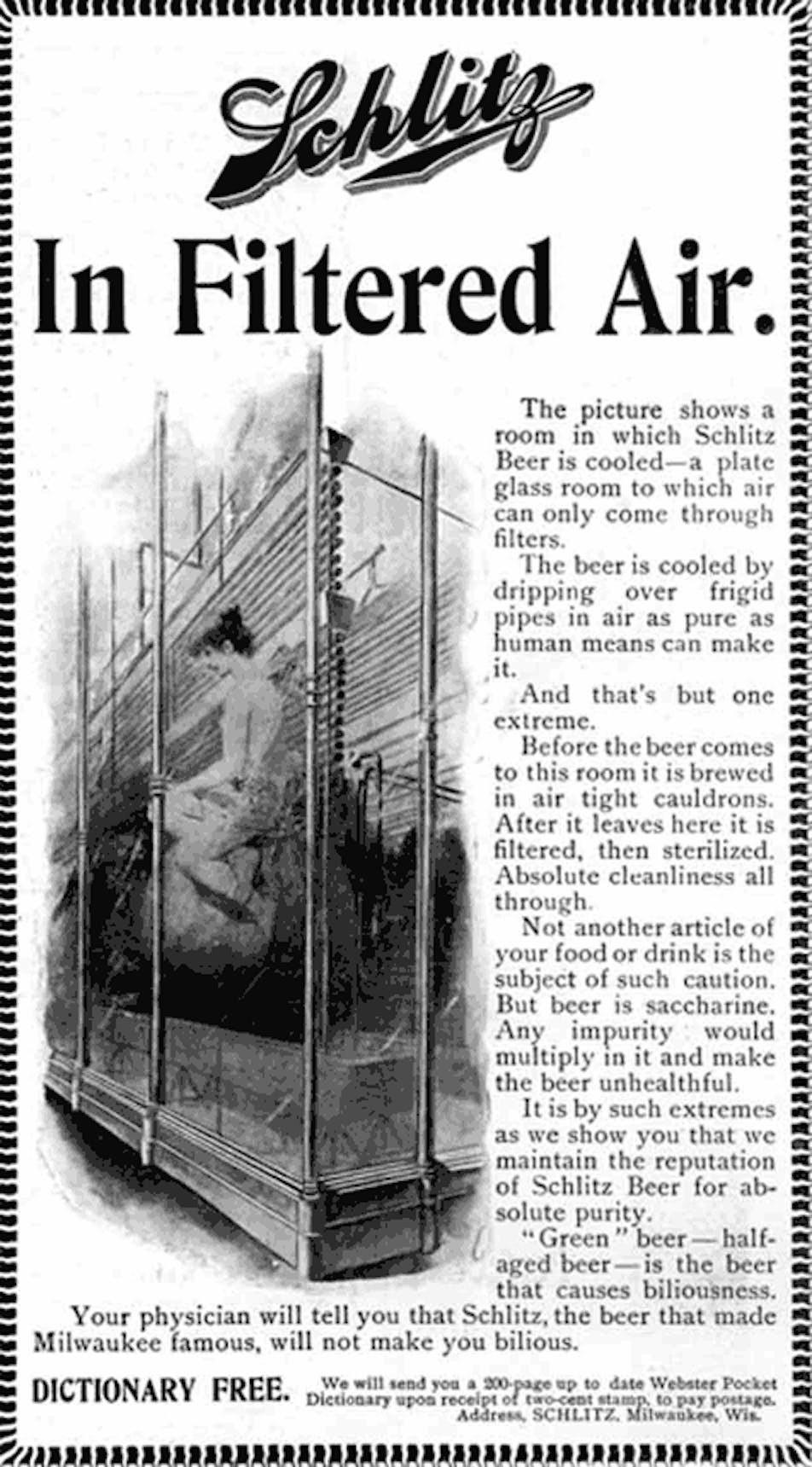 Perhaps the very reason that Hopkins’ book, Scientific Advertising, is so revered is that the principles he discusses are timeless—the ad and copy you see above seem awfully familiar when you start looking at the visuals and storytelling used in today’s “behind the scenes” campaigns.

It’s the same practice that Apple Computers has applied in launching and marketing their products, such as the release video they made for the Macbook:

You’re probably not surprised to find that Viberg Boot uses this, of all images, at the front and center of their homepage: 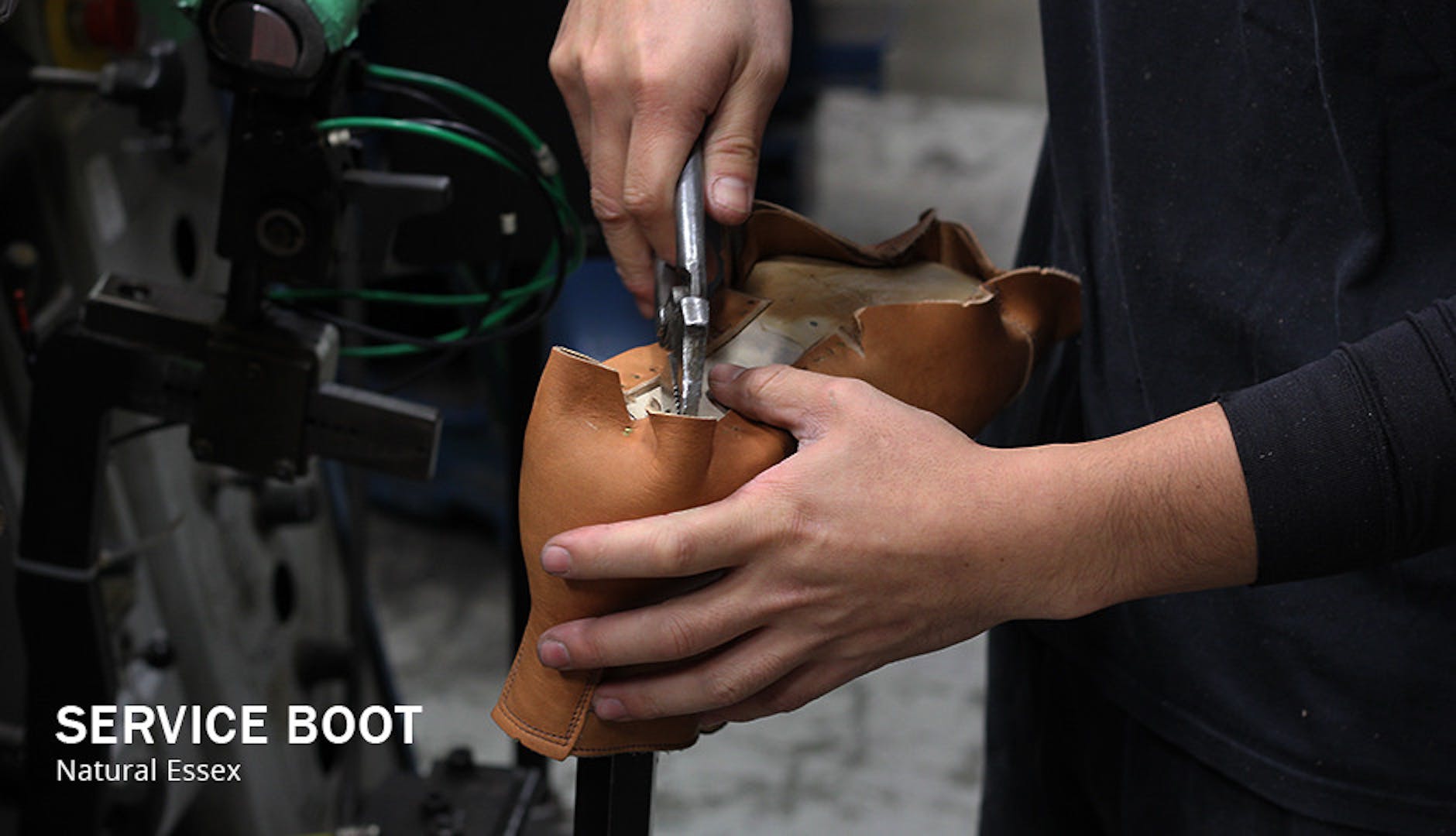 Not a glisteningly polished version of their final product, but the photograph of an unfinished boot under construction. It feels raw and real, and it says so much in very little space. Watching someone hammer in brass tacks speaks to very few people, but those people are Viberg’s ideal customers.

The eCommerce space obviously benefits from this tactic like few others. Companies like Naked & Famous sell in saturated markets such as the denim industry by creating captivating videos on the construction and history of their “raw” denim jeans:

You also have companies like Timbuk2, who add a unique twist to this practice: instead of emphasizing the manufacturing aspects of their products, each page has an informative video on the everyday use of each item they sell.

In other words, before you fork over your hard earned cash, you can watch a very passionate individual explain the ins and outs of the exact item you’re about to buy.

But giving customers a peek behind the curtain doesn’t have to end with physical products. The “behind the scenes” strategy is applicable in quite a variety of industries.

Putting the Spotlight on Customers

It’s hard to overstate the influence of candid customer reviews. And yet, an opportunity that many businesses miss is to shine the spotlight on current customers, scoring themselves a great piece of marketing material in the process.

Excuse the cliché metaphor, but a customer exhibition is like a review on steroids. It allows real people who pay you money to share, in detail, why your product allows them to do what they do so well.

It’s no secret that we love Mailchimp, and their video series entitled Mailchimp at Work serves as a wonderful example of how (and why) it pays to let your customers put their best foot forward.

While the intersection of art center + email marketing may never have crossed your mind until this article, watching the moving parts come together in a case study like the Walker Arts Center video creates a compelling case for how and why Mailchimp can greatly improve a company’s day-to-day operations.

The term “win-win” gets thrown around a lot, but few instances exemplify a universally positive situation quite like these customer showcases. Your customers get free exposure in exchange for a candid, authentic account of how you help them get things done.

We’ve gladly participated in this exchange ourselves! We were particularly proud to be included in Wistia’s How They Work series, which makes great use of the company’s primary medium (video) to explore the ins and outs of how up-and-coming companies cook up magic, and how Wistia becomes part of that recipe.

Like a proud parent, you get to post your customers’ greatest successes on a virtual refrigerator, while at the same time building goodwill and trust with prospects. And if well-written prose is your strong point (over a visual presentation), take some notes from Shopify, who highlights small business Success Stories from eCommerce shops who operate solely on their platform.

Companies like Black Milk have been able to share detailed descriptions of how and why they were able to succeed by using Shopify to host their online store—what better proof of use could you ask for? 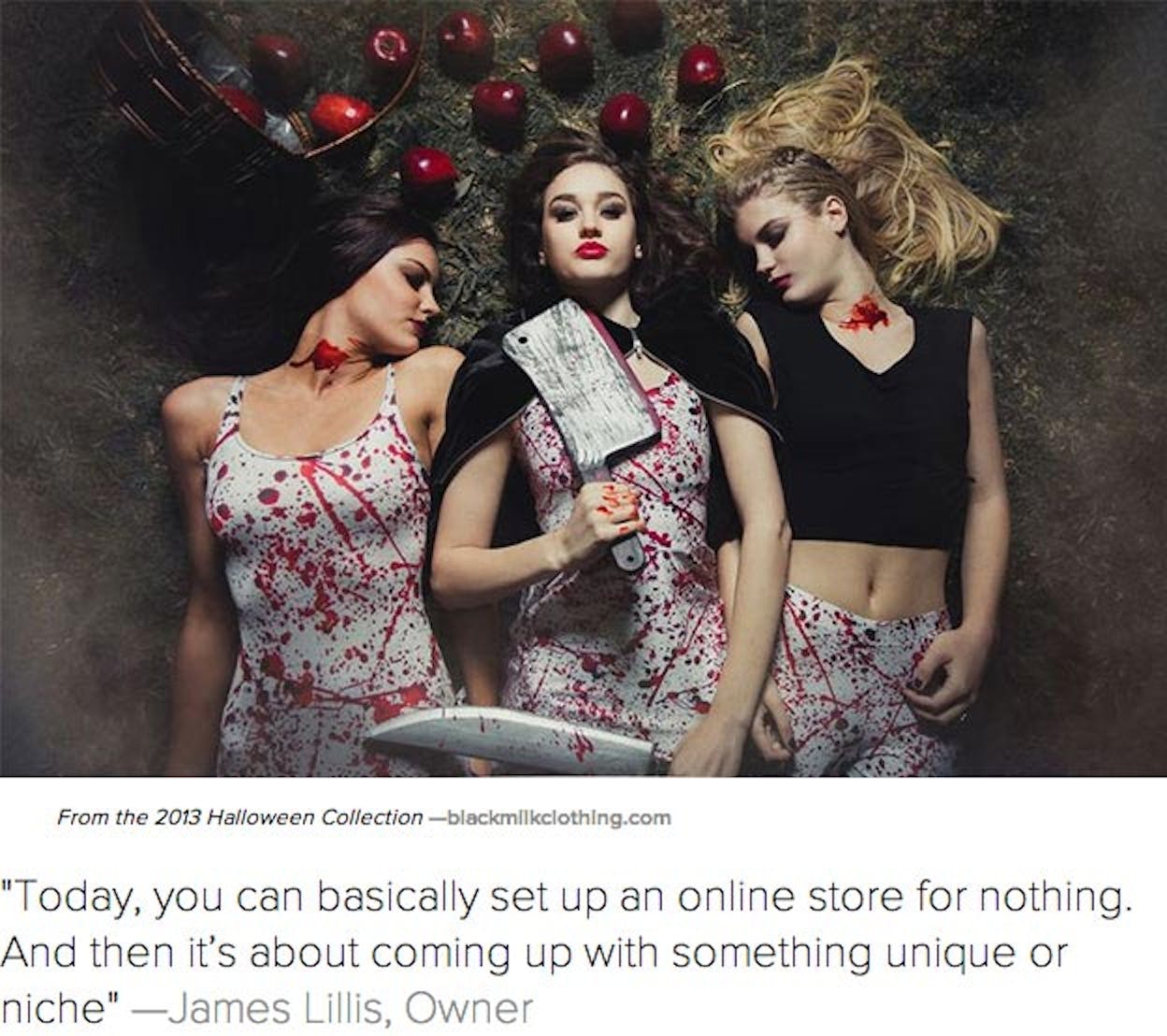 One final use of “drawing back the curtains” that I’d like to discuss is the open book policy of sharing your company’s most intimate details with customers. How might transparency be used in tangent with trust and persuasion?

The Case for Transparency

It’s been fun watching the “transparency movement” taken to the logical extreme by our friends on the Buffer team.

In an attempt to give onlookers an unparalleled view at how their company operates, Buffer has willingly published a few bits of company data that would be viewed as taboo anywhere else. These include: 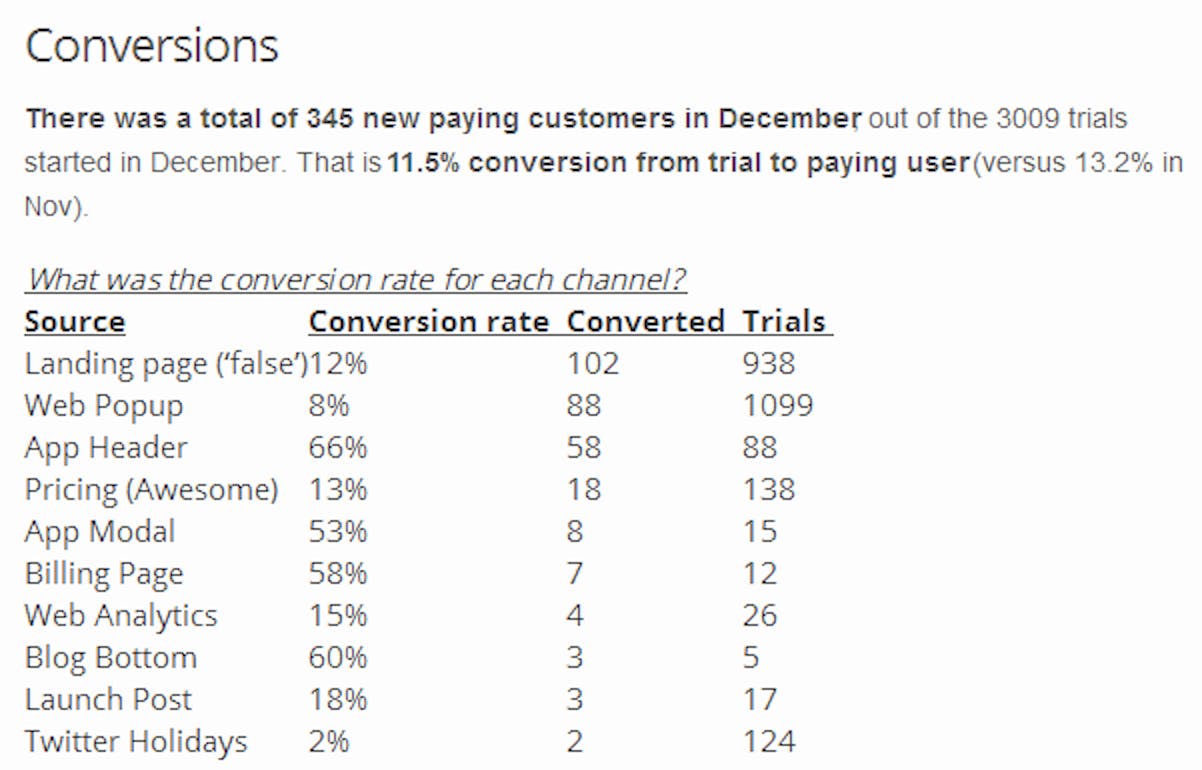 Perhaps the best explanation comes from how the company handled a not so ideal situation. Certain policies cascade throughout the company’s culture, and in a moment of crisis—customers’ accounts were hacked and posting spam messages—Buffer’s open response came naturally and elicited feedback like this:

When times are good, transparency has numerous other benefits. It adds faith to prospects evaluating your company. “Here today, gone tomorrow” is very concerning in the B2B space, and open conversation with customers can alleviate this concern.

It also allows you to clearly communicate what values you share with customers. You know from previous research that customer loyalty is deeply tied to your customers’ perception of your brand’s values, and transparent coverage of what you do (and why you do it) makes this connection easy.

The 37Signals team has attracted hordes of remote workers through their candid coverage of how they operate remotely on the Signals vs. Noise blog, and later in the full-fledged book entitled Remote: Office Not Required.

Public sharing attracts those most interested in listening. Transparency, in this sense, puts the right people in the seats when your company is trying to build an audience. For instance, if your company values the customer experience over hard-selling and ‘data for data’s sake,’ spilling your guts will attract prospects who hold similar values.