Supporting folks as they engage in all the things that fill them up outside of work is a priority at Help Scout. “Exploring a hobby or side project is something we encourage everyone to do,” said Nick Francis, Help Scout’s co-founder and CEO. “It’s certainly something that’s important to me. I’ve found that those pursuits are a great way to turn off my ‘work brain,’ recharge, and develop gratifying new skills. It’s also one of the reasons I’ve been able to love the same job for 12 years and counting!”

Interested in learning more about how that support for employees’ passions plays out in real life? Read this installment in our Here for it: Work + Life series, which introduces Help Scout team members who are melding personal projects or fulfilling hobbies with their remote roles to create a pretty phenomenal work-life blend.

Jesse Short starts each work day in a basement in Omaha, Nebraska. But that’s a good thing.

The basement, in the home he shares with his wife, Jamie, doubles as Jesse’s recording and production studio. “I spend the first hour of every work day, from 7-8 a.m., working on my music,” he said. “I’m always recording something, so I work on production and the business side of things first — vocals might come later in the day, when my voice is warmed up.”

And no, Jesse, a full-time content strategist at Help Scout, is not writing songs about customer communication platforms. The songs he writes, produces, and mixes — distributed under the name Ill-Advised Poetry — navigate love and life and the big feelings we’re all working through. And they clearly resonate with folks: He has about 33,000 monthly listeners on Spotify. While he said he generally resists answering the “How would you describe yourself as an artist?” question, he added, “If pressed, I describe myself as a singer-songwriter in the sense that lyrically my music is a bit more focused on storytelling — but the production leans a little bit more pop.”

While a conversation with Jesse about his music reflects his humble, self-deprecating approach, his passion and ambition are a clear throughline as well. “I consider music 100% my second job,” Jesse said. In differentiating it from a hobby, he owns the commercial aspirations he has for the music he’s making. “I want as many people to hear it as possible,” he said, “and I’m taking concrete steps to make sure that happens. I actively market the music, and, to some degree, when I’m writing and producing songs, I do consider if the end product is viable for a wide audience.” He also travels and performs live, as he did recently for a gig in Philadelphia.

The seed of Jesse’s love for music was planted early. Both his parents played instruments, and his older brother played in a band in high school. He picked up guitar himself as a teenager, but, he noted, words were always the driving force behind his musical ambitions. “I think learning an instrument was always a means to an end. I was always drawn to artists who wrote their own songs, so I always felt playing an instrument was my path to writing.”

His early introduction to music served as a launching point, and in his post-college years spent in New Orleans, living in a house filled with fellow musicians, he developed his passion further and began performing live for audiences. From there, his music career developed alongside a career in customer support that paid the bills. As he booked live performances and released music as an independent artist (first under his own name and then as Ill-Advised Poetry, beginning in 2020), he moved from customer support roles into freelance and in-house writing positions focused on customer support topics.

A culture of autonomy supports all the dreams

Jesse’s writing and support expertise ultimately landed him at Help Scout, where he was drawn to the fully-remote culture. “I had been working both as a freelancer and in-house for companies that offered some remote positions, but my experience in hybrid setups wasn’t ideal,” he said. “Remote employees were generally making accommodations of some kind and weren’t valued in the same way.” At Help Scout, Jesse appreciated the remote-first culture and felt support and empathy from teammates and leadership around integrating his two professional goals, in music and content, from the beginning.

Specifically, he said, the trust in employees sets Help Scout apart. “We have a lot of autonomy over our work schedules, which allows for flexibility for me to do my writing work and also fit music into my day,” he said, “Help Scout’s flexible PTO provides the time to travel to perform if those opportunities come up, as well.” Beyond the cultural norms and benefits that support a side hustle, the kindness and support that he feels in his team and companywide among colleagues and leadership for work/life integration is pretty unique. “People are just excited for you when you share something you’re doing personally,” he said. “I think that piece has been a consistently positive element of my experience. I’ve had great managers and have felt so supported.”

When asked if he thinks one career path will ultimately win out — full-time music versus full-time writing — Jesse said he’s committed to keeping both in the mix. “I think the longer that I do both, the more I realize that they are equally valuable for different reasons in my life. While the balance of time devoted to each may shift over time, I’d like to always do both.” Each offers a different kind of fulfillment and challenge, he added, but they share a significant quality that he appreciates: “Both writing and playing music, especially live, require you to put yourself out there — and, often, to be humbled. Both require humility,” he said. 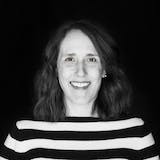 Diana is a content writer at Help Scout, where she writes about values-driven founders and companies for In the Works and loves to share stories about the phenomenal people and practices Inside Help Scout.