Think about a time in your life when you felt most included. What was going on, and how did it feel?

Now take a minute and think about a time in your life when you felt excluded. What was going on there, and how did that feel?

Some of us have more power than others, but as individuals, we can take a number of thoughtful actions that add up to create a better, more inclusive and inviting culture.

As an individual within your company, you don't need to be in the C-Suite or on the People Ops team to affect the kind of positive change that inspires people from different backgrounds to apply and feel included once they're hired.

How transparency fosters diversity and inclusion — my story

Exclusion is nothing new for me — in fact, it was my norm for a long time. As a black, bisexual, college-dropout-woman-with-lots-of-opinions, the idea of inclusion was a fairy tale I only read about.

When I applied to jobs, I wouldn’t use my real name — Chanita — on my resume. Sometimes I’d lie and say I had a degree. I never included my LinkedIn or social media in fear of people seeing the real me. I would “code switch” to seem more appealing to the company culture or brand.

That changed when I applied to Help Scout because of this blog post.

I’d been a fan of Help Scout for a while, and it was inspiring to see them openly admit their shortcomings. This time, the hiring process was so different — I didn’t change my name on the application; I didn’t feel the need to act like anyone other than myself during interviews. They got to know the real Chanita and it felt fantastic!

No matter what your role is, you can affect the kinds of change at your company that inspire people from different backgrounds to apply (and thrive once they’re hired).

Everyone in the company — leadership and individual contributors alike — should practice transparency. Admit to your shortcomings and encourage others to do the same.

That’s what Leah’s blog post about Help Scout’s demographic data did, and that post is what encouraged me to apply. I could have gotten a rough idea from the team photos on the “About us” page, but for the company to actually come out and say it made a bigger impact, and felt like an invitation for growth.

Instead of addressing a group of people as “guys,” why not “team” or “folks” or “y’all”? How about trying something fun, like “party people” or “fellow humans”?

Recognize that some commonly used words, like “crazy” or “ghetto” or “females,” can make people uncomfortable. They might not bother everyone, but they do bother some people, and it’s not hard to find other (usually better!) substitutes that don’t exclude anyone. Buffer has a great guide to inclusive language here.

According to Valerie Aurora from Frame Shift Consulting:

An ally is a member of a social group that enjoys some privilege that is working to end oppression and understand their own privilege.

Allies speak up even when it’s scary. It sounds simple, but it makes a huge impact. If you have the social capital to say, “We don’t say that here” when someone uses non-inclusive language — and to suggest more inclusive alternatives — use it. Allyship makes underrepresented people feel comfortable and confident.

If I didn’t know I’d have allies standing up for me and championing for me, I would be terrified starting work at a new company where I was the only black queer woman. Knowing you’ll be supported and appreciated goes a long way toward alleviating any fears about being the “only one.”

5. Switch up your social media scene

Who do you follow on Twitter? Who do you retweet? Which Instagram posts are you liking? Which Facebook groups are you in? What can you do to switch that up sometimes? Resources like #DiversifyYourFeed, POCIT and Colorlines can help, but again, do your own Googling!

Who is getting credit for ideas in meetings? Be mindful of who is dominating conversational space, and who is getting interrupted. There is so much power in speaking up for people and amplifying voices that may not otherwise be heard.

If you can, support underrepresented peers to speak at conferences, write for blogs, teach customer classes, appear in company videos and so on. If you’re invited to speak on a panel but you and all the other participants are from more privileged groups, consider recommending someone else in your place. If you’re asked to appear on a podcast but you don’t have time, think about whose career could use a boost and suggest them instead.

If you belong to an identity group with power and privilege, it can be easier to ignore some of the difficulties other people face. Challenge yourself not to! “Leaning into discomfort” means having the hard conversations, showing up for others and not tuning out the realities of the world we’re all living in.

One of the small ways we lean into discomfort at Help Scout is with a # diversity Slack channel (where the above screenshot recommending “party people” as a gender neutral form of address came from!), as well as private channels for women, people of color and LGBTQ+ team members.

We all make mistakes! It truly is a part of life. When someone calls you out for making a mistake, rather than getting defensive: apologize, discuss what happened, try to understand the problem along with the impact, learn from it and move on gracefully.

I find that when you ask thoughtful, specific questions pertaining to a certain kind of feedback, you can get high-quality answers. For instance, I could ask a team member, ‘hey, are there any words I’ve used in team meetings or in writing that have stuck out to you and caused a reaction? If so, what were they?’

The more I heard feedback about being an ally and changing my vocabulary, the less defensive I became when receiving the information. I also started asking more questions, being more proactive and even giving others feedback based on what I had learned.

It sucks when it’s all on the offended party to initiate a difficult conversation. Good allies don’t wait for the feedback.

Do you know five amazing people within your industry who are either:

If not, that’s my challenge to you: Get to know at least five people you wouldn't think to communicate with before. Don’t be afraid to spark up a conversation on LinkedIn! Sit next to a stranger at the next conference you attend. Break the ice with someone in a different department and have a fulfillingly random conversation.

Start where you can, and trust that it only gets easier.

Why we’re still talking about diversity and inclusion

I could share plenty of statistics and quotes and powerful images to back up everything I’m saying here — but that’s not what this is about. Honestly, we just need to talk.

So let’s continue the dialogue. Let’s own what we know and what we don’t know, help amplify other voices, give credit where credit is due, support one another, serve as an example and set the bar high for everyone we influence.

If you’re making the world a better place, we’d like to help. 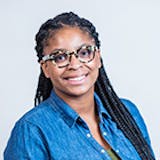 Chanita is a Help Scout alum and the founder of Melanin.Tech.