7 Ways to Show Customers You Care

Customer appreciation is often viewed as a lost art. But smart businesses know that showing customers how much they genuinely care is an opportunity to win people over for life.

Below, we’ll take a look at seven stellar ways to incorporate customer appreciation into your support routine without skipping a beat.

Through the examples listed, you’ll be able to nab some inspiration for how you can stand out from the competition and thank your customers.

Help Scout readers know that a little personalization goes a long way, so you may not be surprised to hear this tale of personal service that went viral — all thanks to a few images.

In a Reddit thread about customer service, a user shared how their restaurant often takes the time to ask customers a little bit about themselves before serving them. They then prepare a custom dessert plate based off of the customer’s interests or anything notable about them.

When a customer recently came in wearing a Navy SEALs hat, this plate was made: 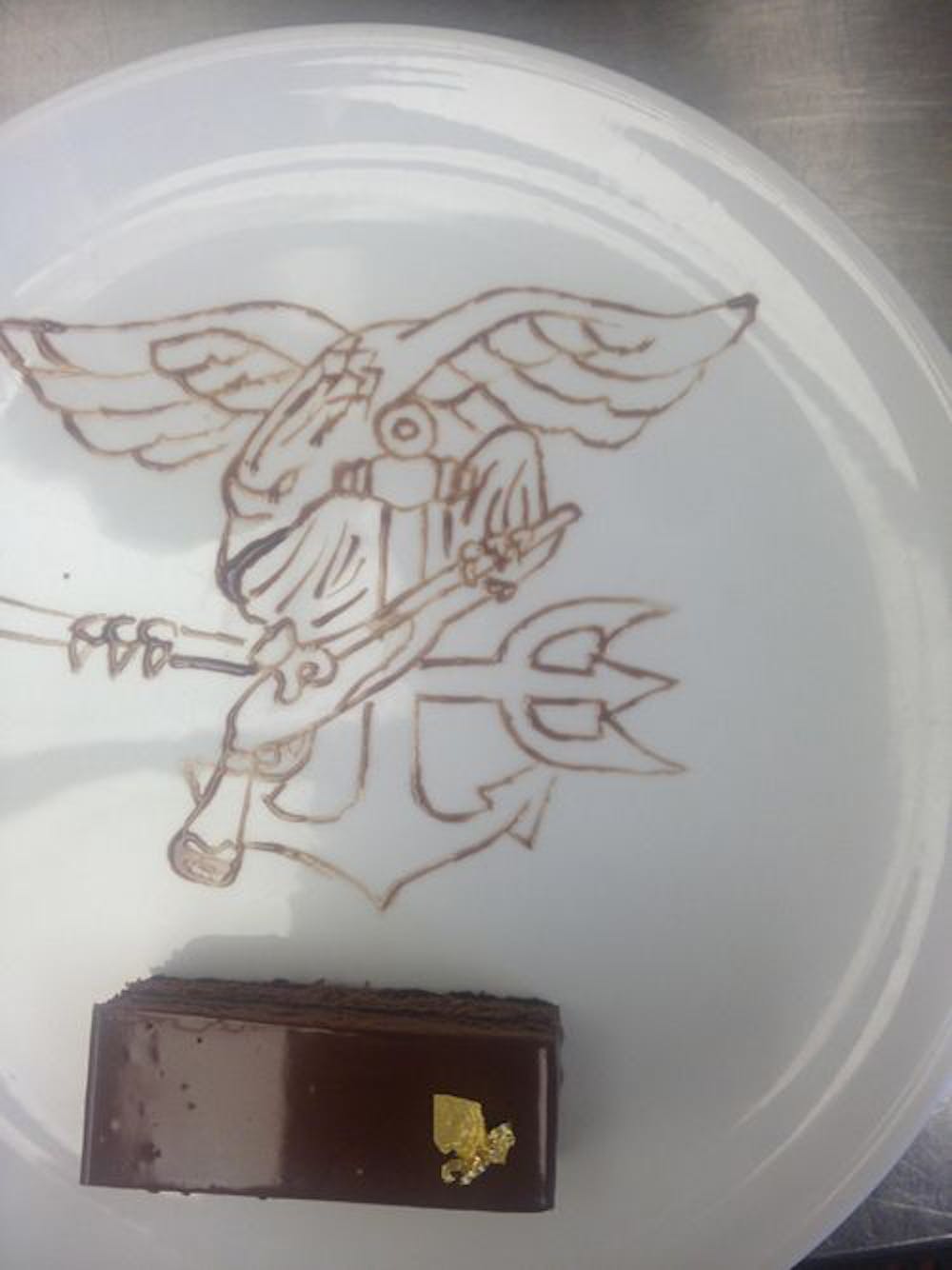 The customer was so happy about it that he wrote the restaurant a letter.

In another instance, a customer had been talking about a recent Cubs game and was fully clothed in Cubs gear, so this plate was created just for him: 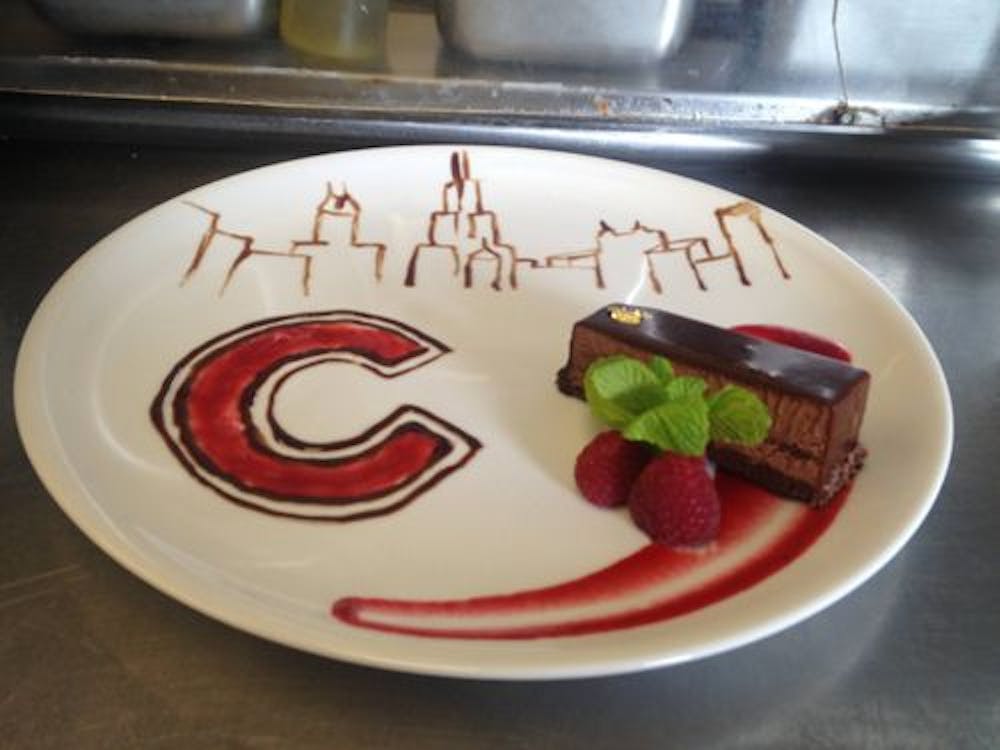 You can find a full album of these personalized dessert plates right here. It’s easy to see why this business is doing well. As we know, it doesn’t take much to create a “WOW” experience that gets customers talking!

What is it about a handwritten note that makes it so memorable? Writing an amazing thank you note doesn’t take long at all, but the impact that it has is huge in today’s digital world.

Check out this example from our friends at Grasshopper, whose personal note impressed a customer so much that he wrote an article about it, sharing his delight at the extra time they took to thank him for signing up: Matt, the customer who wrote the post, best summarizes the effect with this line in his article:

The handwritten thank you note is such a powerful and talked-about gesture that an entire book was written on the subject … and the author claims that writing these notes changed his life!

Can you spare a few minutes to surprise your customers and potentially change your business?

3. Check in with customers

Following up with new customers can be a great help for navigating the onboarding process.

But there are a lot more creative ways to follow up with customers than a simple auto-responder email.

In this example from Bark Park, a doggy daycare center, employees write an update card for customers that details how their dog has been doing that week … and the reports are written from the dog’s perspective! 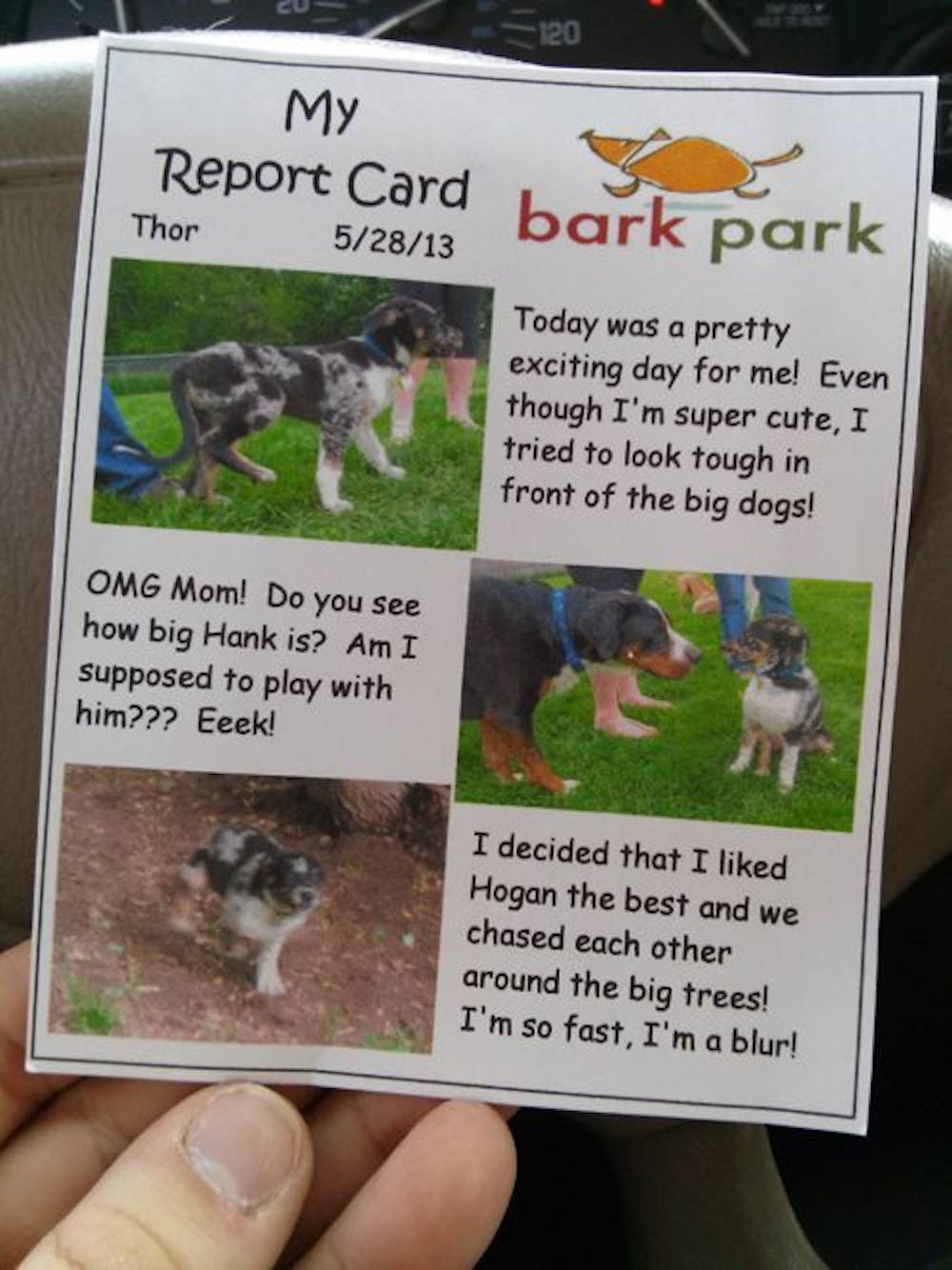 This creative take on checking in with customers is absolutely perfect for this sort of business. I know a lot of people (even some members of the Help Scout team!) who care for their dogs like parents care for their children, so getting a card like puts their minds at ease and makes the business stand out in a unique way.

Nordstrom’s stellar service reputation is one case study where the reality lives up to the hype. From their infamous employee handbook to the celebrated tales of the staff’s service overtures, it is clear Nordstrom is a company that prides itself on loving customers.

One story in particular demonstrates their commitment to excellence and also serves as a reminder of the power of sweating the small stuff.

When a woman in the store lost the diamond from her wedding ring, she became distraught and began crawling around on the ground looking for the ring. A Nordstrom employee saw her crawling under the clothing racks. Once he found out what was wrong, he immediately got on his hands and knees and joined the search!

When the duo came up empty-handed in the search for the ring, the employee asked for assistance from two building service workers. Together, they sifted through vacuum bags until they found the diamond mixed in with dust and dirt.

Things get lost in department stores all the time. The easy-way-out answer to this situation would have been, “Well contact you if we find it.” But not at Nordstrom — because their employees know that sweating the small stuff goes a long way.

Zappos is a company that is connected to some legendary stories of amazing service. One story about an employee who took service to the next level has some interesting lessons to teach businesses about the dangers of red tape.

A customer was shopping for shoes for her elderly mother. Due to her medical condition, her mother had very sensitive feet and was often in pain when wearing hard-soled shoes. The customer bought six pairs of shoes from Zappos, and her mother tried them on and found two that she could bear to wear for long periods of time.

When it was time for her mother to return the other four pairs, she called Zappos and began this amazing tale of kindness:

Being a friendly Midwesterner, one thing led to another, and before she knew it she had a long, warm conversation with the Zappos employee.

In talking with the employee, this elderly woman discovered that the person on the other end of the line could readily relate to her plight; the employee’s father had suffered from similar foot problems due to diabetes.

The employee ended the conversation by saying that she would pray for the woman to feel better … but the story doesn’t end there:

My mom called me to relay the news, and I could hear the smile on her face from 600 miles away. She said that the lovely Zappos person had sent her an enormous bouquet of lilies and roses to let her know she was thinking of her.

My sister emailed the company to thank Zappos for taking such good care of my Mom. Two days later, my mom, sister, and I were contacted and told we are now “Zappos VIP Members,” which entitles us to free expedited shipping on all our orders.

Zappos’ insistence on building a company of sincere and reactive employees (and not of policy-controlled robots that let red tape get in the way of doing the right thing!) is largely the reason they are so beloved by customers.

The icing on the cake?

The customer closed out her praise for Zappos with this message:

My sister vows to buy every pair of shoes, from now on, from Zappos.

This might seem like strange advice at first, but when it comes to building reciprocity with customers and a reputation for exceptional customer service around your business, the key element is surprise.

One story that paints a clear picture of how the surprise factor works actually comes from a big business — Samsung. On their Facebook page, a longtime customer posted a joke sketch of a dinosaur and claimed that he wanted to have a custom case made of the drawing. 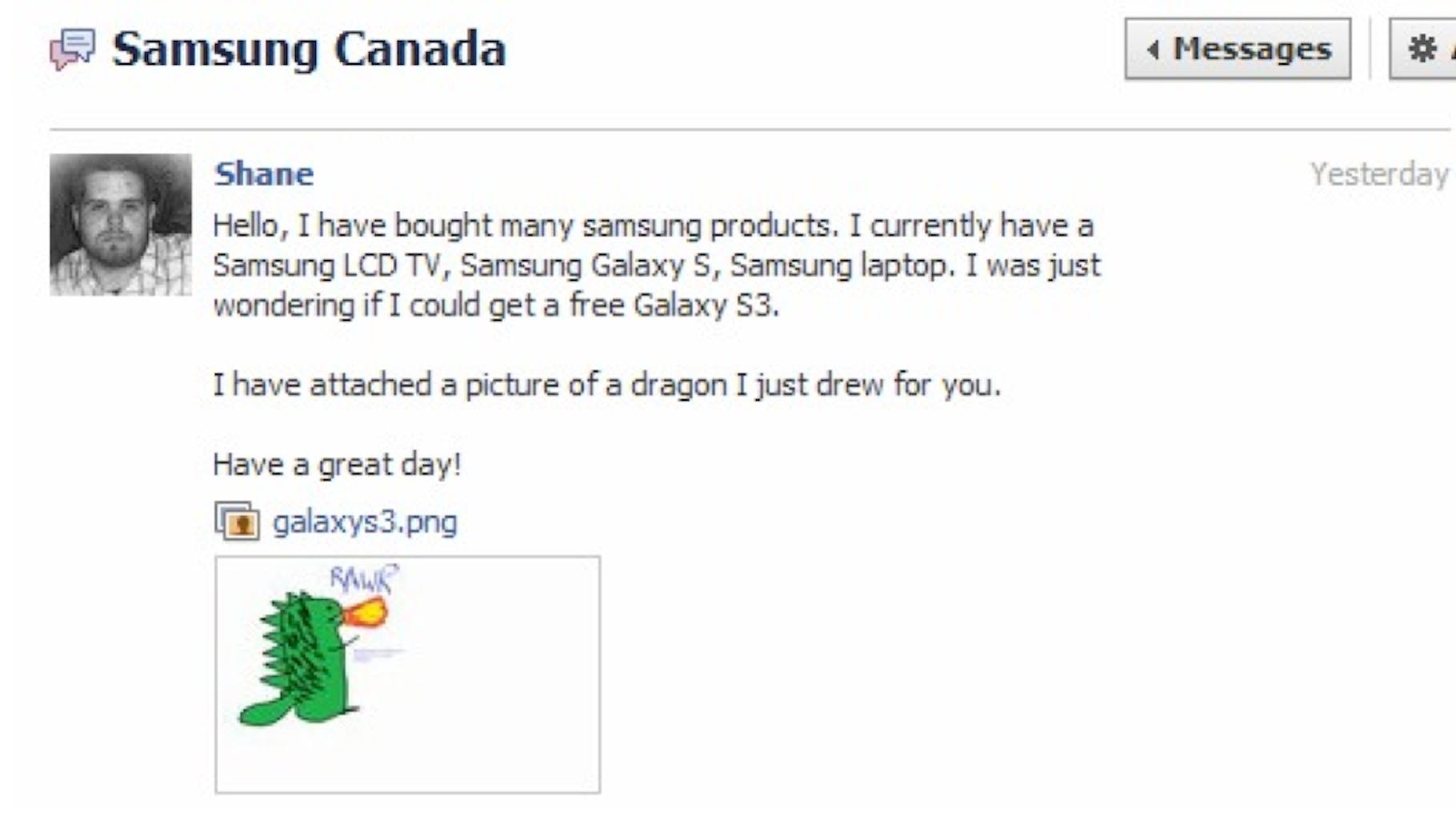 Although it took some prodding, Samsung Canada recognized an opportunity here and sent him a personalized case for the new Galaxy S3! 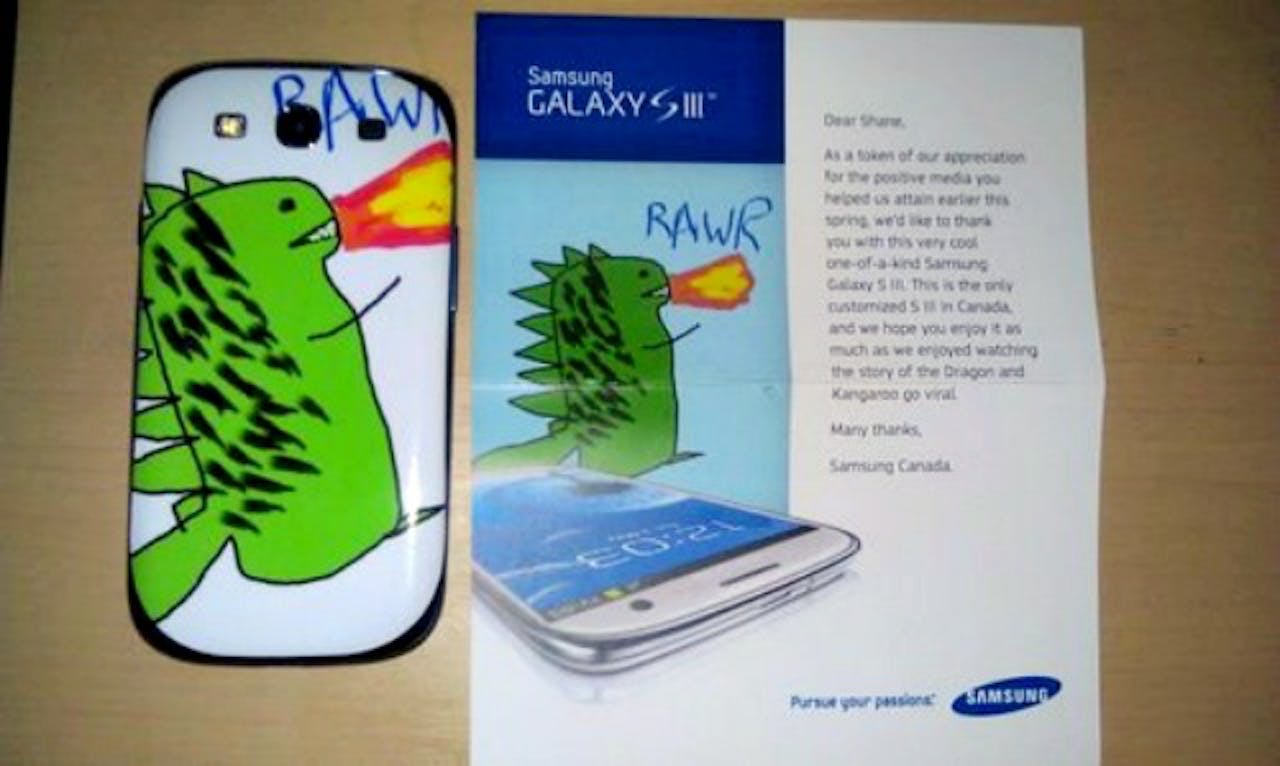 A little positive press is always a good thing. It only takes an eye for unique opportunities to make a customer’s day with an unusual act of service.

In another excellent example of memorable service, Bungie Studios, one of the most beloved game developers in the industry, raised the bar for their willingness to take care of their fans.

The story begins with a distraught father whose son had to receive liver transplant surgery around the holidays. 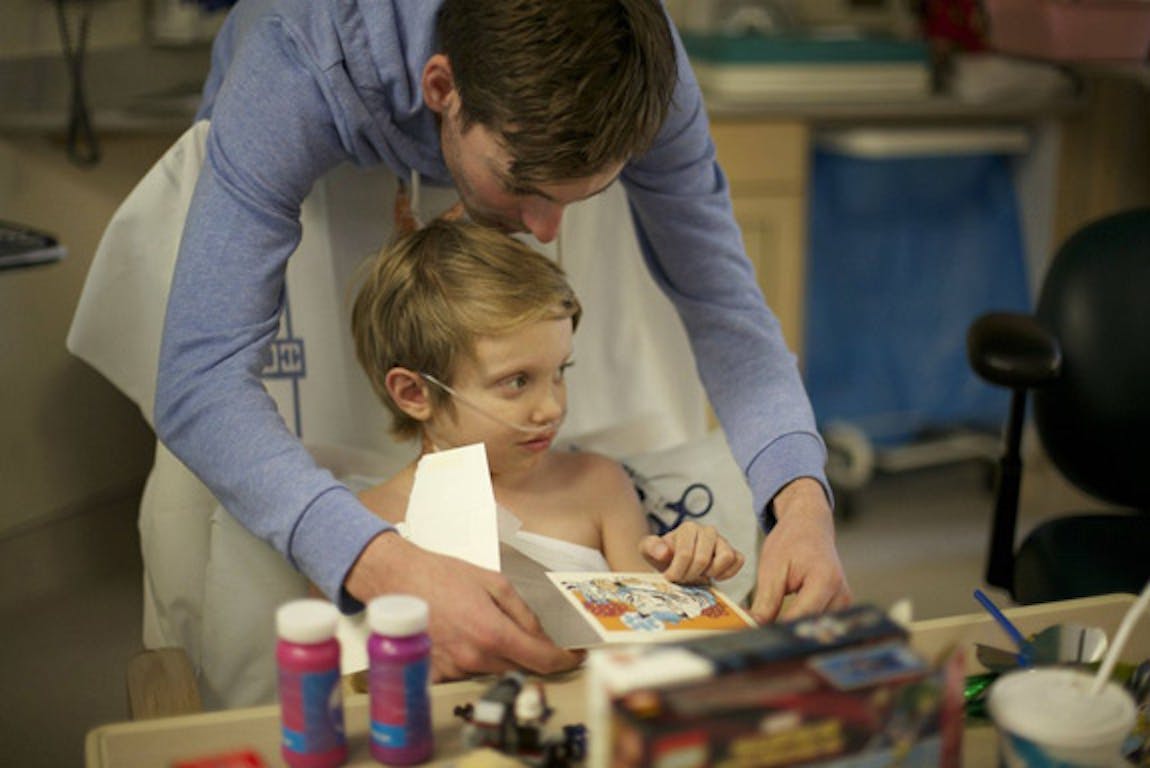 Since being in the hospital left his son unable to play the newest release of his favorite video game franchise, Halo, his dad reached out to Bungie. The response he received from the company went far beyond what anyone expected!

First, the entire Bungie team signed and sent a card with get-well wishes: 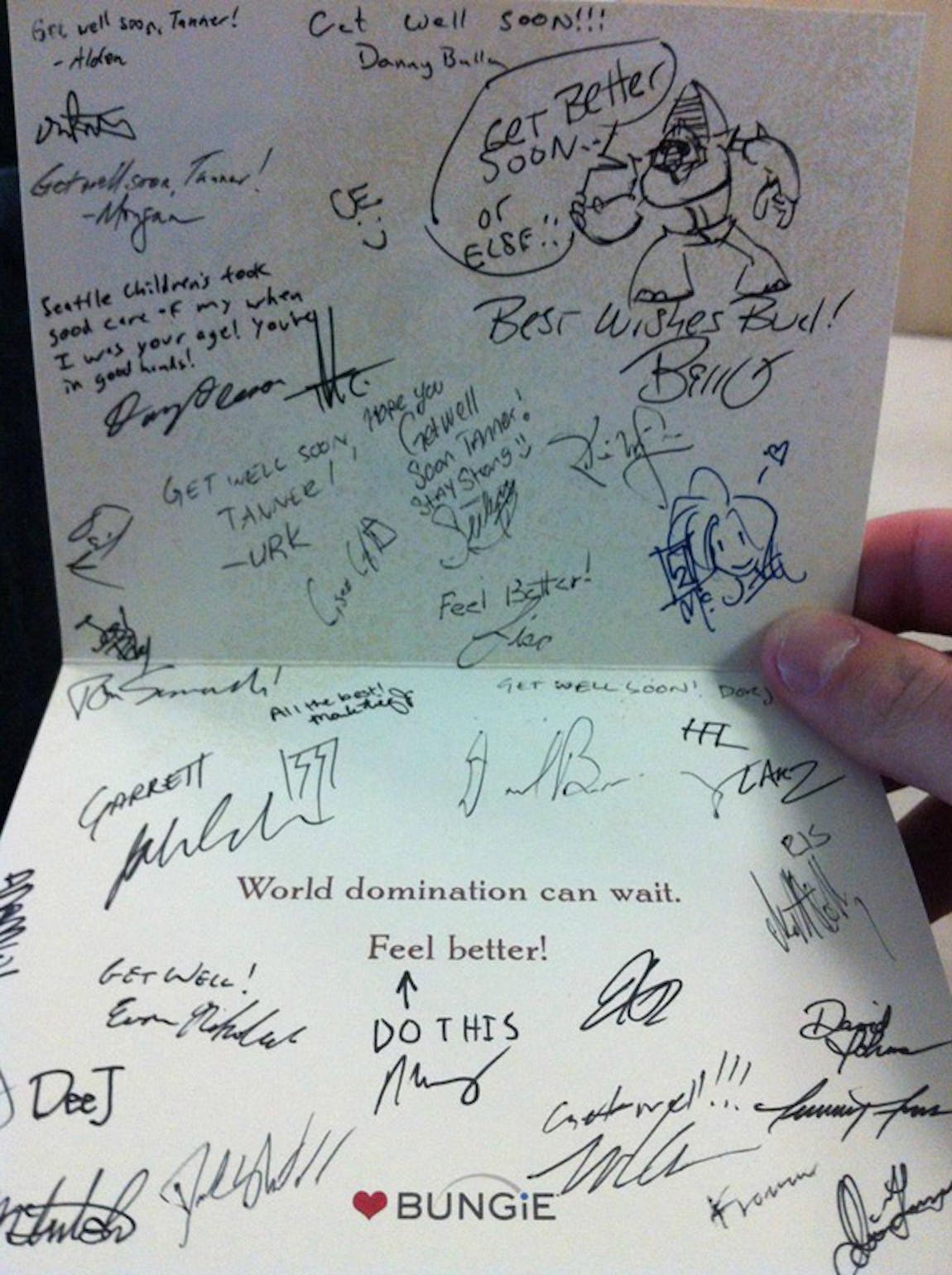 To make up for missing out on playing Halo, the team built him a custom helmet based off of the main character and sent it along with shirts, toys and custom art from the game’s designers: 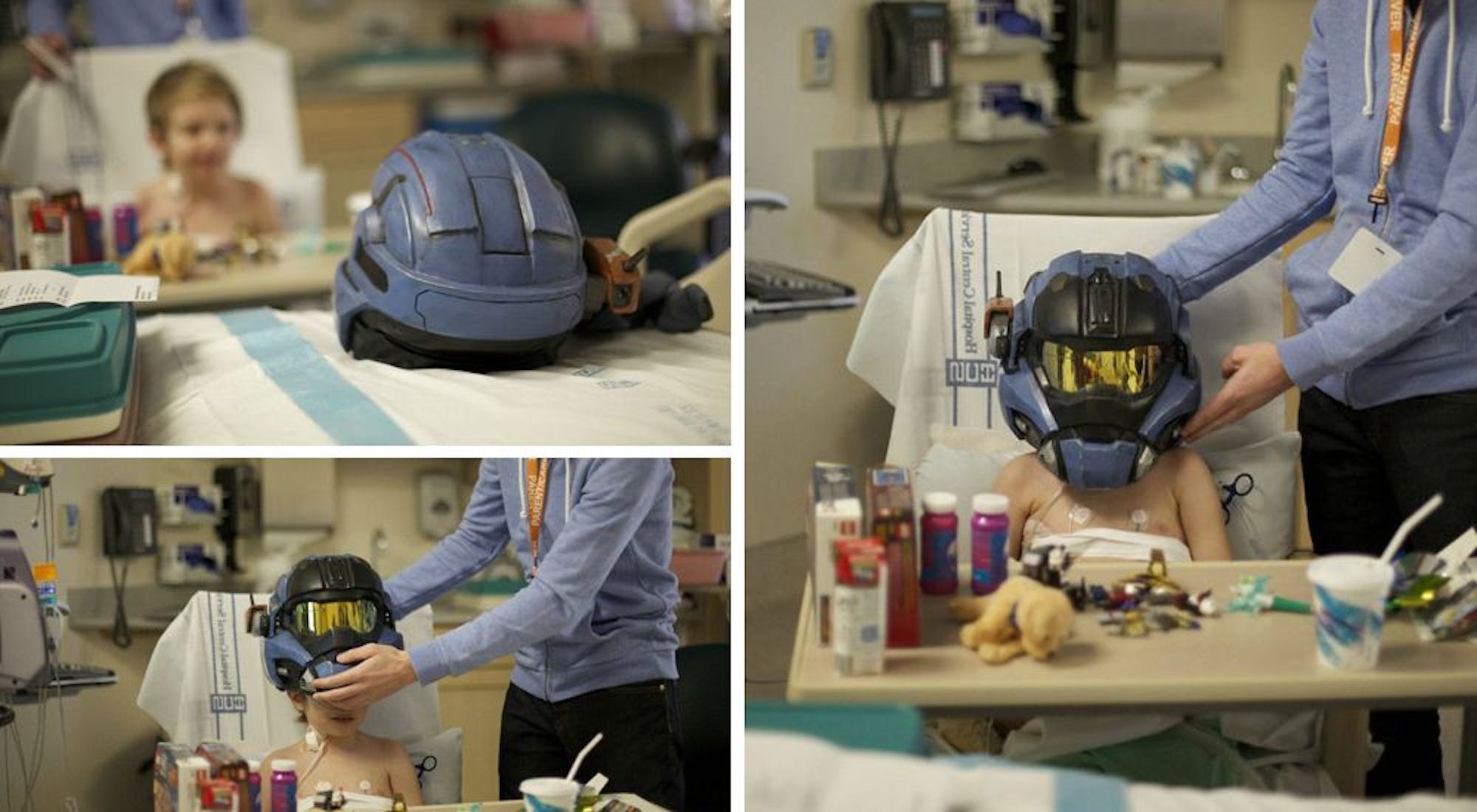 His father later posted a thank you thread and a collection of images on Christmas day, which was when Bungie visited his son in the hospital and brought the gifts:

He was absolutely shocked when he saw the custom helmet from Halo Reach! Bungie, you have played a huge part in making this smile! My family can't thank you enough! The common theme in these memorable customer service stories is businesses that go above and beyond to make a difficult situation right for a customer.