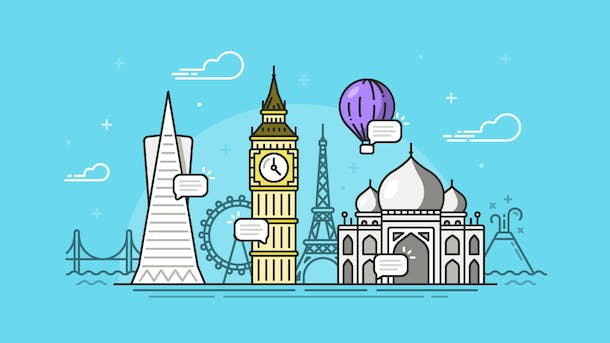 Your site or product may be geared toward people who speak your language, but even before you offer customer service in different languages, people who don’t have alternative solutions in their own languages inevitably seek out your product or service.

It’s a nice problem to have, although providing international customer service can be a challenge before you’re prepared to offer true multilingual customer support.

What do you do when a customer initiates the conversation in Italian, which no one on your team speaks? How do you minimize the back-and-forth as you gradually ascertain that your text editor’s autosuggest is preventing people from typing in Japanese?

Here are six best practices to keep in mind as you scale toward international customer service.

1. Use translation tools and services

Google Translate is perhaps the most obvious translation tool to use, but don’t just translate your usual reply and hit send! Simplify your language before translating, and be sure to include your response in both languages. Most importantly, manage your customer’s expectations with the caveat that you’re using a translation tool.

Google Translate is good, but not perfect. “Beacon code” should translate to “el código de Beacon,” for example, not “el código de baliza.” And “No hay Beacon” would make more sense than “Sin Beacon.” The rest comes across a bit robotic, but it’s understandable.

One caveat: Google Translate uses third-party services for translation, so it’s not HIPAA or GDPR compliant. It’s unlikely to result in a data breach, but it’s wise to only use Google Translate when there are no compliance requirements.

Once you start handling a fair amount of foreign language conversations, Google Translate alone may not cut it.

You might also explore some of the less-expensive-than-you-might-expect translation services out there, such as Gengo. They provide human-corrected machine translations, which, according to Ben McCormack, head of support at Trello, is “a major step up from Google Translate, but still relatively inexpensive.”

Simple words and sentence structure go a long way toward effective multilingual customer support. Most of us don’t think about how heavily idiomatic our native language use is, and we don’t adjust for that when communicating with customers who speak different languages (or via a translation tool).

“The first time I saw ‘how to MacGyver’ something,” says Help Scout support team member Amanda, for whom English is an additional language, “I had no idea what it meant.”

When using Google Translate or writing in your native language to a non-proficient speaker, drill down to the most basic, subject + verb + object phrasing you can.

Step-by-step instructions are great; acronyms and colloquialisms, not so much.

Instead of plugging heavily idiomatic language into your translation tool (“Yikes! Sorry to hear you’re running into trouble — let me see what I can do to help!”), choose short, clear sentences (“I’m sorry. I am happy to help fix this problem.”).

Otherwise, you run the risk of the translation turning into gibberish (“That’s it! Sorry, that the problem goes — let’s see what you can do to help!”).

It’s okay to sacrifice style for clarity in these cases, Amanda says. “It makes the email more boring, but at least the point gets across.”

A picture is worth a thousand words in any language. If you’re concerned about being misunderstood, take a screenshot or record a short video with a tool like CloudApp, or create a quick GIF.

With the right tools, inline visuals save you and your customer both time and confusion.

Amanda is fluent in French, English, and two Chinese dialects. Her Spanish, Korean, Japanese, and German aren’t too shabby either.

That’s not why we hired her — she’s exceptional at delivering customer support — but what a bonus to have someone on the team who can answer provide support in multiple languages and maybe even hop on a call in French from time to time.

Should your business begin expanding globally, you may need to hire support professionals who speak different languages.

Trello offers support in 20+ languages, and one of the ways they support those customers is to hire team members who happen to speak other languages. “This is mostly by accident, but it’s a really nice accident,” says McCormack.

And as long as you’re not leaning on them too heavily, you might run translations past native speakers at your company. Keep a list of all the languages spoken by your team — someone on your engineering team may be able to save the day by helping a customer in Portuguese!

You’ve gone around and around with a customer experiencing some difficult-to-reproduce “bug,” only to finally discover that some U.S. keyboard shortcut conflicts with how a special “S” character is typed in Polish.

While many sites can detect language and apply different rules accordingly, your customers may still run up against problems caused by diacritical marks (such as 丸 or Ç) or non-ASCII characters.

People using your product in another language with their team may encounter issues with keyboard shortcuts more often. Once you bear that in mind, you can skip a lot of the back-and-forth and find a solution more quickly.

It’s great to translate your knowledge base into multiple languages, but perhaps not before your website and tool are available in those same languages.

Pull demographic data to find where the majority of your international customers already are, and focus on expansion and training in one or two languages at first so you can reach the greatest number of customers with less effort.

Finally, make sure support has a seat at the table when it comes to developing an international growth strategy so that you can scale the level of your support accordingly.