The Challenge: The IT team at Ashesi University was using multiple email addresses to receive requests. They noticed conversations were going missing, and many questions covered more than just IT issues.

The Solution: They created a university-wide support center using Help Scout’s shared inbox and knowledge base products. This allowed them to centralize all requests, distribute them to the proper teams, track common questions, and scale service across all departments.

Since its beginning, Ghana’s Ashesi University has been forward-thinking. Instead of simply doing what has been done before, they’ve consistently forged their own path forward, always striving to improve. It’s what led them to be given the World Innovation Summit in Education (WISE) Award in 2017, and it’s how they became the youngest private university in Ghana’s history to be given a Presidential Charter.

So, in 2018 when they noticed a number of support requests were going unanswered, they knew they had to do something about it. Their first plan was to expand the IT team and create a new center for them, as many of the requests they received were IT-related — password resets, login help, etc. However, after an initial assessment, they realized they needed to think bigger.

"We quickly realized there were requests for teams outside of IT coming in regularly, so we decided to make it more of a general support center that would serve the entire university," said Daniel Botchway, Assistant Director of Information Technology.

Up to that point, they’d been using a combination of a few different email addresses as well as a phone desk to offer support services.

With the plan in place to create the new university-wide support center, the team at Ashesi set their sights on finding the tool that could make their idea a reality. The tool they chose was Help Scout.

“From the very beginning we knew we were looking for an email-based solution.…we wanted a shared inbox so we could have someone assign out questions to the responsible teams,” said Daniel.

When they set up the support center, they also decided to switch to utilizing one central email to make things easier for requesters. “We wanted to get a single point of inquiry. The main reason we wanted that was because as we got larger, people were confused about who to send their questions to.”

Having a central point for requests also helps with transparency. “Emails that were sent to individuals were getting slow responses or missed altogether. This tool gave us more transparency into those communications and let us follow up on those interactions to make sure they got a response.”

Along with capabilities for general support requests, they also had some other requirements to help with their IT-related requests, as the multiple email system they were previously using, left something to be desired. “From the IT side, we wanted to be able to track the requests we were getting so we could know the status of issues and whether something had been resolved.…with only email we weren’t able to do that.”

Improving transparency and creating an easier process for requesters were both huge steps forward. But as the team at Ashesi kept exploring Help Scout, they found even more ways to utilize it to their advantage.

When we had a new team member join, she used the saved replies to learn how we handled certain issues and responded to requests.

With a basic system in place, the team at Ashesi started looking for different ways to be more efficient with their time. One of the first things they utilized was saved replies.

“At the beginning of semesters when there are a lot of new students, we get a lot of repeat questions like how to set up an account or where to go to get their ID picture taken. Saved replies helped us answer those really quickly.” As it turned out, their saved replies actually served another critical function.

Along with saved replies, they also used Help Scout’s knowledge base builder, Docs, to house answers for more complex issues they saw regularly. "When we had a new team member join, she used the saved replies to learn how we handled certain issues and responded to requests," said Daniel.

“The documentation was also really important for us. When we saw a certain issue come up multiple times, we could write a tutorial on how to fix it, then share that in a response directly.” Since Help Scout is a connected suite of tools, there is direct access to Docs articles in the shared inbox, making it simple to access that information.

Another time-saving tool they’ve utilized to their advantage is workflows. With workflows, they’re able to automate different tasks, reducing manual work and improving overall efficiency. At Ashesi, they use workflows to reduce manual tasks like sorting requests and adding tags.

“The workflows check subject lines and the body text to look for certain keywords. If any of those conditions are met, those emails get automatically rerouted to the correct person,” said Daniel. They even used workflows to help them retroactively: “We created a workflow to go back and tag closed requests to get a better understanding of why people were reaching out to us.”

Along with saving time on manual work, having the tag data also gave the team new insights. “With the tags, we were able to see what questions came up most, then create resources to address them,” said Daniel.

Responding on the move

Due to the nature of the IT team’s work, it’s common for them to be out in the field. Because of that, they needed a solution that let them be mobile. “We all [IT team] have the app installed, so when we’re on the move we’re able to respond to messages quickly.”

Being able to respond quickly while away from a computer is especially useful because of one special requester. “When our president and founder sees something that needs fixing on campus — a light bulb that’s out or a door that’s damaged — he’ll take a picture and send it through that address to notify us of any issues. No text, just a picture,” Daniel said with a laugh.

“When the president sends a message, you certainly want to take care of it right away. Having the app lets us do that even when we’re not in front of our computers.” They also found that the mobile app is very handy in the case of an emergency.

“We’ve had some instances where the internet went down on campus, and because we had the mobile app we’re still able to connect through mobile data,” said Daniel. Though it’s certainly not an everyday occurrence, it’s good to have if the situation arises.

Since we rolled out the support email system, we’ve actually been able to close down the phone desk since most of those requests come through email now.

The team at Ashesi has set itself up for success by creating a great system and by also encouraging others to use it. “We keep preaching to the university, ‘If you need anything, just send us an email.’”

Help Scout is proud to have played a small part in helping this amazing team serve students, faculty, and staff and is excited to see how they continue to grow and innovate for years to come. If you’re ready to level up your own customer service operation, check out how Help Scout serves higher education or our 14-day free trial. 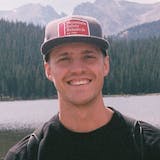 When he isn’t running in the mountains, Alex is helping run product launches at Help Scout, where we make excellent customer service achievable for companies of all sizes.