How to Make Hiring Less of a Headache

Teamwork makes the dream work. When the right talent is working together, magic can happen—but that's the rosy side of the story.

The truth is that hiring is hard. It can't be hacked, and it’s nearly impossible to do without a few mistakes made along the way.

Nobody has all the answers to hiring the right people, but below are some of my favorite lessons from entrepreneurs who have shared their experiences in building a team that is building the dream.

Hiring Is Firing Yourself

"As a founder and CEO, your role will increasingly turn to two major areas: hiring the right people, and ensuring they stay." Alex MacCaw

In an exceptional article on hiring for startups, MacCaw argues that being the CEO of a growing company requires that you (eventually) focus on finding unique talent and getting them to stick around.

As you search for the right person(s), you have to be able to see innate talent and recognize what sort of person they'll become. Hiring thus becomes most important when you find yourself unfit for the task at hand, whatever it may be.

Buffer CEO Joel Gascoigne aptly describes this process in his article “Firing myself, again,” where he explains why the toughest realization many founders face is that they will no longer be able to do it all alone:

"Most people hold on too long, and sacrifice slow down [sic] growth of the company. I certainly have done this myself. However, once you’ve fired yourself from that first task, for subsequent ones which you’re learning from scratch you might want to do them long enough to see the full opportunity and understand the area well enough to ask the right questions when hiring." Joel Gascoigne

This is also important to consider if you are hiring for a position you don't quite get. Having some experience in the position you are about to fill is really useful.

When Help Scout founder Nick hired me, it wasn't that he just wanted to offload content/inbound to some guy. He understood how it worked and was in the trenches making some of Help Scout's content before I was hired; he understood my position.

This matches up with some (slightly) controversial advice from Sam Altman's popular article on hiring, on why founders should get their hands dirty:

"You should spend the time to learn a role before you hire for it. If you don’t understand it, it’s very hard to get the right person. The classic example of this is a hacker-CEO deciding to hire a VP of Sales because he doesn’t want to get his hands dirty. This does not work. He needs to do it himself first and learn it in detail." Sam Altman

Hiring for a game-changing position isn't like outsourcing work on eLance. If you don't know what to look for, how will you know who to look for?

The "No Fun Zone"

I say this tongue in cheek, because working at your company should certainly be fun.

One problem that I've begun to notice with startups looking for talent, however, is that attracting employees has begun to focus far too much on the fringe benefits over the benefits of doing work you love.

I've read job descriptions looking for marketers and after 10 minutes of scanning, I still didn't know which tasks would be asked of me—but I did know that the office had two ping-pong tables and I learned far too much about the lunch menu.

Attracting people around perks is not a smart hiring strategy. The situation unravels even more if your team never really connects on any meaningful level.

Do you want the team bonding over the company skeeball machine, or over loving the work that they do?

Some companies try to make work fun rather than hiring people that have fun doing the work. When I describe our team to others, I depict a bunch of people who delight in their craft, and I think it's 100% true.

This is an aspect our team has jokingly referred to as the "No Fun Zone," in that our job listings focus on the enjoyment of the work first.

I've teased our CEO Nick Francis about making sure postings don't completely look like “no fun,” otherwise we'd have nobody applying!

The truth is, besides the important stuff, most of our exchanges really are light-hearted and fun. Behind the scenes, a huge portion of our communication is just sharing laughs. 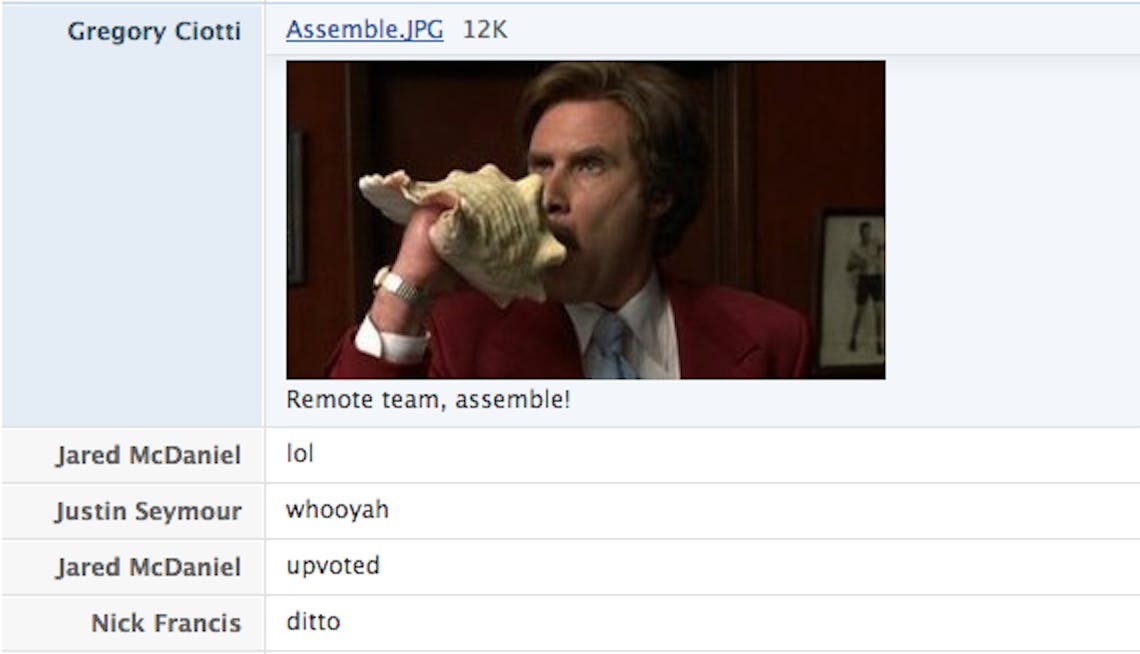 But we would never want to write a job listing that attracts people who don't truly love digging into their craft and pushing themselves to improve their skills, and you shouldn't either.

A good job description is an important beginning in the hiring process. Getting this wrong is like getting your homepage copy wrong—the effects trickle down to everything else.

One of the best pieces on this very underrated topic comes from our friend Wade Foster in a recent article published on LinkedIn:

"With a properly worded job description, you’ll benefit from having fewer applicants to consider and more high-quality applicants in the pipeline, allowing you to spend less time on the hiring process and more time on your day-to-day operations." Wade Foster

As founder and CEO of Zapier, Wade definitely knows a thing or two about hiring. Here was some of my favorite advice:

Here’s one great addition that I saw in the comments:

"I have hired two candidates without using CB, Google, or any of the big boys. It was through a creative CraigsList posting for a Networking Specialist. The catch to my ad was part gamification; find the errors in the ad and report them back. If the candidate failed to do so, they were instantly deleted. Why? Because they obviously didn't read the ad."

I can see this "Easter Egg" filter being applied in really creative ways, so you wouldn't necessarily need to copy the Where's Waldo style search that this manager recommended.

A final piece of advice from Jon Taffer: make a list of adjectives that describe the perfect person for the position. If you’re hiring for a support rep for a fun company like GrubHub, I'd imagine energetic, spunky, and creative wouldn't be too much of a stretch.

The more honest the adjectives, the better. Now check your job listing. Are these words used at all? They should be.

"Why don't I tell you what my greatest weaknesses are? I work too hard. I care too much. And sometimes, I can be too invested in my job." Michael Scott from The Office

Can we just be completely honest with ourselves here? Many applicants have mastered the art of bullshitting employers during interviews.

Knowing if you can work with someone and if they truly have the requisite skills is often only found by actually working with them.

As Sam Altman suggests, a prospect—or even a new hire—can be treated as a contract worker and given an interesting (but non-critical) task that would be typical of the job.

"Whenever possible (and it’s almost always possible), have someone do a day or two of work with you before you hire her. . . . If you’re interviewing a developer, have her write code for a real but non-critical project. For a PR person, have her write a press release and identify reporters to pitch it to." Sam Altman

Buffer actually has a new employee bootcamp that lasts for 45 days. This is a more comprehensive take on an audition that is reserved for people who are hired but need to make it through the bootcamp to become a made man/woman. Joel Gascoigne describes it as the dating period before the full commitment.

Whether your team takes things that far or not, do recognize that you will get a lot more out of a live audition. Typical interviews usually result in meaningless exchanges where silver-tongued individuals can tell you want you want to hear.

Get the real picture about what it's like to work with someone by actually working with him or her first.

Operating as a remote team isn't for everyone, but it certainly offers a variety of benefits, not the least of which is the potential to hire talent that isn't constrained by location.

If you are interested in hiring remote workers, however, you need to be on the lookout for a few specific characteristics:

"Every company has a culture. The only question is whether or not you decide what it is." Jason Cohen

Wise words from Jason Cohen, and a final point to always consider when building an exceptional team.

Culture won't seem like it matters at first. "I just want the best people. Who cares about culture?" Fact is, culture has a major influence on how people view their work. The most able person now may become a mediocre candidate in a few years if work ethic and self-improvement aren't promoted among your team.

Joel Spolsky describes why this is important from the perspective of hiring developers:

"Our goal is to hire people with aptitude, not a particular skill set. Any skill set that people can bring to the job will be technologically obsolete in a couple of years, anyway, so it's better to hire people that are going to be able to learn any new technology rather than people who happen to know SQL programming right this minute." Joel Spolsky

What Joel sums up in an ideal individual can be scaled for the whole team. If you let your culture slip, you might end up building a team of people who are fine taking shortcuts.

Buffer has an interesting take on attracting and encouraging the right sort of culture by having an entire presentation around the values the company holds dear.

The Buffer Culture (with a new 10th value) from Buffer


Interacting with anyone from that team, you definitely sense each and every trait. It feels genuine because culture is something you just can't fake. When you do, you end up with atrocities like this video.

Your company's culture just may end up controlling you, but will it be to your benefit?